With a one-night tournament to crown a new strawweight champion, Invicta FC was back in a big way Friday, with Invicta FC: Phoenix Rising 1.

Invicta FC kicked off a new era on Friday, putting on Phoenix Rising 1. The card, going down at the Memorial Hall in Kansas City, would witness the crowning of a new strawweight champion. But a crucial difference from championship bouts past: the winner would have to run the gauntlet, winning three fights in a single night.

Yes, the tournament format was rising from the ashes once again, this time in Invicta. A mainstay of early MMA, many promotions have resurrected tournaments over the years, including Bellator, ONE Championship, the PFL, and others.

Invicta, however, would try to stand out with the crowning of a champion after a single night, a rarity for a major MMA promotion. However, to keep from going over a total of five rounds, quarter-final and semi-final bouts would be one round affairs. The final would be a three-round fight, with the title on the line.

One reserve bout will be an exhibition fight, and 19-year old Kay Hansen will appear in the co-main event, in a non-tournament bout.

The card airs live on UFC Fight Pass – check below for results!

Kalin Curran was having a career resurgence in one night, and shocked many on her way to the finals. Sadly, her story wouldn’t end as well as it started. Brianna Van Buren started the fight with a big slam takedown, and didn’t give Curran a chance to breathe in the first round, as she out muscled Curran and dominated.

The second round, Van Buren took her down again and got the back. After alternating between a neck crank, and a rear-naked-choke, she would secure the choke. She would get the choke, and with that, she was now the Invicta FC Strawweight champion. What a night by the young fighter.

Round one was all Kay Hansen, as she used her grappling to avoid Sarmova’s submission attempts, and land a big slam takedown of her own. She ended the round on top, however the second round wouldn’t go as smoothly. Sormova would get a trip-takedown and would spend almost the entire first round on top, with the exception of the end of the round where Kay rolled to end up on top to close out the round.

The third round is where things got all wild. Sormova dominated the first half of the round, getting Hansen’s back and looking for a choke early. However after a failed armbar attempt, Hansen moved to Sormova’s back and looked to get a submission finish herself. However Sormova would move to her back, and Hansen would jump on an armbar from there. With ten seconds left, it looked in, but Sormova gutted it out. A fantastic fight.

Kalin Curran started the bout with a big hip-toss, and doing good work from the top. Not much longer, Jacobson would work her way to the feet, and get a big slam takedown. Curran would work her way back to the feet, and start landing combinations, including a big knee. Jacobson would then move the fight back to the ground with an opportunistic takedown, and would end the fight on top, but it was too late.

Brianna Van Buren made sure that Lima earned some frequent flyer miles. Buren slammed Lima down early, and although Lima made her way back to her feet after threatening with an armbar, she was soon slammed again. Van Buren ended the round on top, and dominated the fight.

Khran utilized a grappling heavy strategy to defeat Itzel. Khran landed a takedown early, and often. However she didn’t do much damage, and didn’t throw many strikes when on top. Itzel landed a big upkick, and landed the harder strikes of the fight. Overall, a hard to fight to judge. However, Khran gets it done with her grappling.

Van Buren starts the fight with a big slam takedown. She then moves into mount, and starts doing some ground and pound against the cage. Kolekar moves back to her feet, before being slammed back down. Van Buren gets the mount again, and transition to an armbar, and she gets the tap!

Taylor and Lima spent five minutes fighting in the clinch, with Taylor attempting to get the takedown and Lima defending it for the majority of the five minutes. Taylor did get a brief takedown late in the round, but Lima got up quickly. Tough round to score.

One of the most exciting rounds of the year, Curran started the fight with a big knockdown of Sunna. Curran then looked for the choke as she got the back, but lost it. Sunna then worked her way into a takedown and full mount, where she landed big punches on Curran. Curran found her way back to her feet where she again dropped Sunna. Sunna survived and then found another takedown to end the round on top. 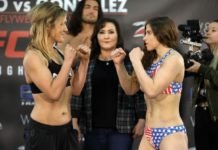 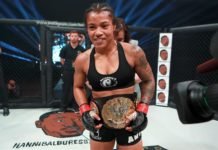 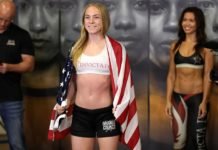