David Rickels gets back in the cage Saturday at Bellator 210, staying at welterweight (unless it’s for the right fight, say, against Benson Henderson) and thumbing his nose at the suit-and-tie affair MMA has slowly become.

On Friday, a dangerous and brutal character will return to the Bellator cage, a prehistoric barbarian who feels right at home smashing and banging: Caveman Rickels. Or David Rickels, when you move past his neanderthal persona. Caveman is back in the cage at this weekend’s Bellator 210 in Thackerville, Oklahoma, anchoring the co-main event against ‘Bomba,’ a.k.a. Guilherme Vasconcelos.

It’s the Caveman’s first fight back since a tough loss to Michael ‘Venom’ Page. That loss saw the gritty Rickels retire from the fight early in the second round — an almost unthinkable scene for those who have followed Rickels’ career. It’s a defeat he has called “humbling,” and one he intends to come back strong from.

“The biggest thing was like, out here in the midwest, I don’t have any coaches that can help me, instruct me, and guide me on my path,” he said of that fateful Bellator 200 bout. “So a lot of the decisions I make on how I train and what I’m doing are solely on me.”

Ahead of the MVP fight, Rickels told Cageside Press, he “cut out like all my sparring.” In retrospect, Caveman feels he simply wasn’t training right for the fight. In the past, he’d trained elsewhere. “I was going out to Colorado, and training with some guys out there, and I really loved it. But I own two businesses now, and I got two kids. It makes it really hard, to be honest.” Moving forward, he’d love to do some training with other teams, but “right now man, it’s just me and my team here, that I’ve been with the last ten years.”

In terms of lessons learned, while Rickels enjoyed cutting sparring out of his schedule, “it just didn’t translate into getting f*cking mean when it’s time to get mean. So there was that problem.” What he’s been looking for lately is balance, “because I used to basically only do sparring to get ready for fights. That was how I got ready for fights. It was like alright, we’re just going to fight all the time, and we’ll be ready.”

The modern, more enlightened Caveman is aware that can’t continue. “As this game is evolving, I realize I have to get better. I need to progress my skills as well. So finding a balance between getting coaching and learning new things, and still biting down on the mouthpiece when it’s time and trading some blows.” That’s the ideal.

Despite the loss to MVP coming in Rickel’s return to welterweight, he has no desire to go back down to 155. Unless, of course, it’s for a particular opponent. “I think I would if it was the right fight. I’ve wanted to fight Benson Henderson my whole career, so there’s one name I would probably drop for,” Rickels revealed. “Or Roger Huerta. But my health is more important to me than any dollar sign— well I don’t want to say any dollar sign, ha-hah! Because the right amount of money could get me to fight, but my health is very important to me. That’s really it at the end of the day.”

“I’ve never understood why guys try to pretend they’re dope-*ss strikers all of a sudden when they’re black belts in jiu-jitsu.”

When we spoke to the Caveman, it was just before American Thanksgiving. And despite the lesser weight cut, he still had to reign himself in come the feast. He’d already been working on getting bigger, “so I can adapt to fighting at 170, because the guys are just bigger and stronger.”

End result, “I’m gonna eat some turkey, that’s about it!”

He’ll have to take his hunger out on Bomba then. At Bellator 210 against the fighter properly known as Guilherme Vasconcelos, Caveman is expecting one thing for sure: “I expect, you know, Bomba. I think he’s going to try to throw bombs.”

Yet while the fight may start out that way, “I think once he realizes that his best chance is the grapple, I think that that’s what it’s going to go to,” Rickels said. For good reason. “I mean he’s a good grappler. I’ve never understood why guys try to pretend they’re dope-*ss strikers all of a sudden when they’re black belts in jiu-jitsu.”

“I think eventually he’ll probably shoot, but he uses that sh*t really well together too,” Rickels elaborated. “I of course got to be on my A-game, keep my hands up, not get caught with a bomba!”

.@TheCaveman316 sure knows how to make an entrance. Watch him do battle in the @bellatormma cage Friday live at 9/8c on #ParamountNetwork. #Bellator210 pic.twitter.com/XqSRJh9hyM

Although he’s coming off arguably the toughest loss of his career, Rickels hasn’t lost his sense of fun. It’s one of the factors that makes the Caveman, well, The Caveman. His walkouts are some of the best in the business. He gets the entertainment factor more than most. And he enjoys it.

“It’s fun man,” he said of putting together his entrances. And nevermind that he’s coming off a loss. “The walkout has nothing to do with whether I win or lose. That sh*t is for my personal enjoyment. I love it, and I’ve been doing it since the beginning. I’m not going to stop just because ‘I have to be all business now, I have to win this fight, it’s so important!'”

Saying that he’ll give his best fight regardless of his entrance, Caveman recalled fighting in Albuquerque, and getting a reaction he never expected. “I’d never fought in Albuquerque before, and I wasn’t a big name. This was like the second tournament I did. I did some kind of dope-*ss walkout. I can’t remember, I think I had the club and some other stuff. Man, people were cheering my name based on that.” Based on just his entrance. “They wouldn’t even know who the hell I was,” he continued, “but they’d see this dude with a little charisma walking out, enjoying himself. You can gain some fans based on that alone.”

It’s a dying art in MMA, in part because certain promotions seem to have actively attempted to bury it. “We’ve unfortunately headed towards the whole “I have to wear a suit and tie” thing,” said Rickels, “and I’m still on that same Nick Diaz sh*t where I’m like ‘this is a f*cking fight, y’all need to chill out.’ Y’all are getting way too fancied up, y’all are doing too much. This is a fistfight at the end of the day, don’t church it up.”

He admitted to seeing why the sport has headed that way. “I get both sides, I do. It looks better.” But having said that, “I don’t see why you can’t do both.”

So can we expect a Caveman in a suit? “Yeah why not. I wore a suit once. Leopard print.”

At Bellator 210, Caveman Rickels will also take sole possession of a company record: it’s his 21st trip to the Bellator cage. Joe Warren, also on the card, hits twenty fights. Quite the milestones, really. “It’s like with the guy that gets a Rolex for being at his company for twenty years,” Rickels said of the honor. “I feel like me, Joe Warren, Pitbull brothers, Chandler, there’s just some guys that I feel like we do deserve a little more respect, because we kind of paved the way for this whole thing.”

As to the key to their longevity, Rickels said it’s simply because “we put on exciting fights. That’s what we do.”

If he weren’t fighting, what would the Caveman be up to? “A lot of people wouldn’t guess this, but me being older myself now, I’ve even thought of going back to school for psychology,” he told us. “I love the inner workings of the human mind. Caveman behavior. We all act like f*cking cavemen. Cavemen, cavewomen.”

Don’t worry though. That’s not for a while yet. Just a hair under thirty, Caveman has plenty of fight in him still. “As long as I’m healthy and loving this game, dude, I’m the very last person who’s going to let people tell me when to quit.”

Instead, he’s in this game until a time “when I don’t enjoy it anymore. When I’m not passionate, when I don’t want to wake up at 5AM and train. That’s when I’m going to quit.”

In other words, there are plenty more walks to come for The Caveman. Starting with Bellator 210 in Thackerville, OK on Friday, November 30. The event airs live on the Paramount Network starting at 9PM EST. 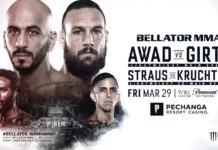