A promising women’s strawweight bout has been announced for the UFC 233 card in January, as Cortney Casey will take on Cynthia Calvillo in Anaheim.

Cortney Casey is going to continue her string of tough fights. On Wednesday, UFC officials added a strawweight contest between Casey and Cynthia Calvillo to the UFC 233 card, following an earlier report by The Orange County Register. It will be a quick turnaround for Calvillo, who fought earlier this month at UFC Argentina. For Casey, meanwhile, it’s yet another high caliber opponent for a fighter who never says no to a scrap.

Calvillo (7-1) got in the octagon for the only time this year in Argentina, beating Poliana Botelho in her first fight back from a marijuana suspension. The victory over Botelho, a first round submission via rear-naked choke, got her back in the win column after the first loss of her career against Carla Esparza last year.

Cortney ‘Cast Iron’ Casey is also coming off a win, against Angela Hill at UFC Lincoln. Casey snapped a two-fight losing streak with the victory, which came via a split decision. In fact, her last three fights have ended in split decisions, and overall, the judges have not been kind to her. Key to Casey’s story, however, is that she continues to take fights against some of the division’s toughest opponents. Claudia Gadelha, Felice Herrig, and Michelle Waterson all threw down with her prior to the Hill fight. 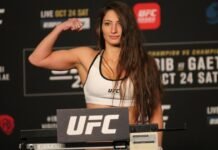 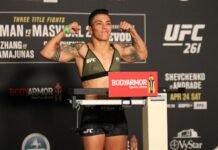