With a promising featherweight title fight between champ Patricio Pitbull and challenger Emmanuel Sanchez in the main event, Bellator 209 was sure to bring fireworks — starting with the preliminary card, featuring MMA’s second generation.

Bellator 209 went down Thursday night in Tel Aviv, Israel, at the Menora Mivtachim Arena. However due to a tape delay, the action wouldn’t air until Friday night. And you can catch the preliminary card live stream right here on Cageside Press! That would include the return of Khonry Gracie, looking for his first victory after a setback at Bellator LA against Devon Brock earlier this year. Gracie, son of UFC star Royce Gracie, wasn’t the only son following in his father’s footsteps in Israel however.

Another second generation fighter, Aviv Gozali, was fighting on the same card as his father. Haim Gozali was set for a rematch with Ryan Couture, while Aviv was due to face Anton Lazebnov. 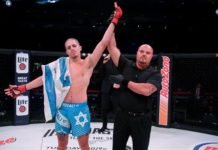