Rashid Magomedov had a late switch in his semi-final opponent at PFL 9 on Saturday, but it didn’t phase him, as he finished Thiago Tavares to move on to the Pro Fight League finale on New Year’s Eve.

Long Beach, CA — Rashid Magomedov had to battle two tough opponents at PFL 9 to earn his shot at the Professional Fighters League 2018 lightweight finale at the end of the year. First up was Will Brooks, the former Bellator MMA 155lb champion. That fight ended in a draw, but Magomedov had done enough to get the nod via first round tiebreaker. Then came his second fight, and a switch in opponent. After Islam Mamedov was unable to continue in the tournament, the “lucky loser” rule saw Thiago Tavares get a second chance against Magomedov.

Magomedov wasn’t phased by the opponent switch. Speaking to reporters backstage (via translator), he said that he was initially just preparing for “Will Brooks. After I fight him, I just in general was preparing myself psychologically for two fights.” In short, “I was ready to fight.”

On the other lightweight semifinal, between Chris Wade and Natan Shculte, Magomedov told Cageside Press that “I think it was an even fight.” That bout ended in a split decision win for Schulte. “I’m relying on the judges, it’s their job to judge and score,” he said. “I feel the fight was hard, and a competitive fight.”

As for fighting twice in one night, “the main thing is I didn’t get injured, so I could fight the second fight very well.” Moving into the final, there’s just one more fight, and Magomedov, who parted ways with the UFC after defeating Bobby Green in April 2017, will now have ample time to prepare for his final challenge this season.

Asked how he’d celebrate should he win a million dollars on New Year’s Eve, he said “I’d like to help people who needs money,” and suggested he’d make a charitable donation with at least some of the winnings. In another plus, unaware that Fedor vs. Chael at Bellator 208 had already taken place, Magomedov got one last bit of good news Saturday night.

Check out the full post-fight press scrum with Rashid Magomedov from PFL 9 above. 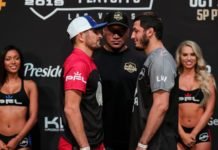 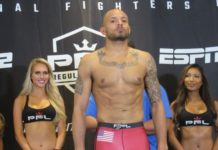 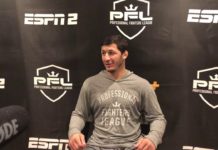