Rashid Magomedov vs. Nate Andrews at PFL 5 2019 on Thursday was a scrappy, gritty, hard-hitting and downright fun affair in the lightweight division.

Lightweight action at PFL 5 2019 in Atlantic City on Thursday saw America’s Nate Andrews facing off against Rashid Magomedov. Andrews especially was in need of points, while Magomedov was looking to add to the three he’d claimed in the opening fight of the season.

As action got underway, Andrews fired off a number of low kicks early. But it was a head kick that at least partially got through which really opened things up. Magomedov would next push Andrews up against the fence, but Andrews would catch his opponent off the break. Andrews would catch another high kick, and follow that up with a right hand. Magomedov was suddenly under fire, and ate a number of knees in the clinch. Andrews was swinging hard throughout the round.

The second had Magomedov putting a little more behind his punches. The pair traded early, a wild exchange the underscored the very nature of the fight. Andrews, much to the chagrin of Magomedov’s corner, didn’t seem to be tiring yet. He would land several hard, clean blows on the Russian in the second round. Again, he’d catch a kick, and fire a right hand over it. His kicks were getting through as well, but Rashid Magomedov managed to take Andrews down with just under two minutes left in the frame.

While Andrews would fire off some offense from bottom, Magomedov just missed with what looked to be a massive left hand. That took them to the third round, of what was a very spirited fight. But not before what looked like a slightly late kick by Magomedov, which went a bit low, while Andrews was still on his back. However, it hit the posterior more than anything, and the ref allowed them to head to their corners.

Round three saw the pair tie up early, and Magomedov take his opponent to the ground in due time. He had plenty of time to work. Andrews would try to scramble, and briefly threatened with an arm-bar. Magomedov would then get back in control, but with about a minute remaining, the ref stood them up. Andrews would try a capoeira kick late, but they’d go to the buzzer. 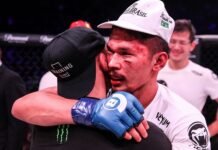 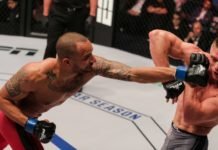 Bellator 254: Nate Andrews Feels Big Win Over Yamauchi Could Put Him On Path to Gold 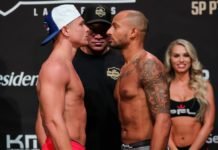