The fourth bout on the UFC Atlantic City main card was between heavyweights Justin Willis and Chase Sherman.

UFC Atlantic City, headlined by Kevin Lee vs. Edson Barboza, is going down tonight on Fox Sports 1. In the fourth fight on the main card, it’s the heavyweights Justin Willis and Chase Sherman throwing down. Justin Willis is undefeated in the UFC with two wins under his belt in the Octagon. Chase Sherman is a colorful internet personality who last lost to Shamill Abdurkhimov in Shanghai last November. However, he won two fights prior to the loss.

The two immediately came out and started swinging, Willis throwing big shots and Sherman had to move out of the way. Willis landed a big straight left about a minute in that stunned Sherman, at least momentarily. The two traded a little back and forth, however, Willis kicked Sherman in the groin and took a few minutes to recover. A giant left hand drops Sherman! Willis gets on top and starts landing giant ground and pound, Sherman recovers and gets to his feet and starts landing on Willis. Sherman continued to pressure Willis and eventually got him up to the fence, where the round ended.

Round two began and Sherman came out throwing some leg kicks, Willis still showed his quickness and speed. Sherman accidentally eyepokes Willis in what continued a fight full of fouls. The two continued to trade shots until Sherman threw a headkick and fell down, Willis then jumped in Sherman’s guard and started landing ground and pound. Willis ended the round on top after peppering Sherman with shots.

Sherman came out guns blazing in the third landing lots of kicks to the body and legs, knowing he’s likely down on the scorecards. Sherman pressured Willis on to the fence and started landing his elbows and knees. However, they didn’t appear to be hurting Willis. Eventually, the two separated and Sherman started landing more shots frequently with the hands. Willis forced Sherman into the clinch and pressured him up against the cage. Sherman tried to push the pace a bit more and get a finish but he was gassed by that point. The fight will likely be Willis’s. 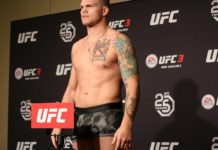