David Branch took on a very dangerous opponent in Thiago Santos at UFC Atlantic City and passed the test with flying colors, knocking him out in the first round.

After a great 10-0 run in WSOF in which he won two titles, David Branch returned to the Octagon for the first time in seven years at UFC 205. Branch defeated Krzysztof Jotko in his Octagon return then fell to Luke Rockhold in a main event bout at UFC Pittsburgh.

Thiago Santos is a notorious knockout artist on a four-fight win streak, stopping each opponent with strikes. Santos is 9-4 in the Octagon with eight thunderous knockouts and two separate four-fight win streaks. “Marretta” can stop fights in many different ways, from his thunderous punches, to spinning back kicks, the Brazilian shows great variety in his striking technique.

Thiago Santos whipped a head kick around that came up short to start things out. Santos went to the body then the leg with kicks to follow. Santos landed as Branch was attempting a looping right hand. Santos kept him at bay with kicks and straight punches, as Branch waited for his window.

Santos was chopping Branch down with leg kicks, then Branch moved in and landed an uppercut that sent Santos backward toward the fence. Branch pursued and landed a huge left hook that floored the Brazilian. David Branch got back in the win column with a huge knockout and he’s now due for another huge matchup.

David Branch was asked who he’d like to face next and he jokingly said his boxing coach. The veteran Branch was ranked eighth prior to this bout, and knocking out the 12th ranked Santos will certainly bump him up the rankings, setting him up for another top 10 matchup. 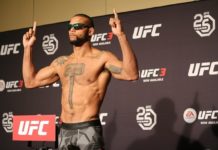