December’s Invicta FC 26 card has had a bit of a shakeup, with Jessica-Rose “Jessy Jess” Clark off to the UFC to face Bec Rawlings. Additionally, three new fights have been added to the card.

Invicta FC announced Wednesday that former UFC fighter Milana Dudieva (11-6) would step in to take the place of Jessica-Rose Clark next month. “Jessy Jess” announced earlier in the day that she’d be facing Bec Rawling at UFC Fight Night 121 later this month. That’s after Rawlings’ original opponent Joanne Calderwood dropped off the card.

Dudieva made her Invicta FC debut at July’s Invicta FC 24. There, she dropped her first fight in the promotion to Mara Romero Borella. Prior to that, she had lost two straight in the UFC. She’ll be facing bantamweight standout Vanessa Porto.

In addition to the lineup shuffle, the card, which takes place in Kansas City, MO, also has three new bouts added. Among them, a strawweight tilt between undefeated Brazilian Virna Jandiroba (11-0), making her promotional debut against Amy Montenegro (8-2). Jandiroba has secured nine of her eleven career victories by submission.

As for the other two bouts, at atomweight, Amber Brown (6-4) will face off against Tessa Simpson (5-2). In flyweight action, Karina Rodríguez (5-2) takes onChristine Ferea (1-1).

The current Invicta FC 26 card is as follows: 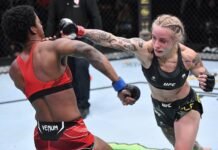 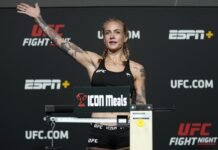