The injury bug has struck again, and the MMA gods have proven how cruel they can be as recent injuries have devastated the year’s final two UFC PPV cards.

Bad news for the UFC: just days after coming off their biggest card of the year, their final two PPV events have been rocked. As first reported by Brazil’s Combate, Frankie Edgar, who had been set to challenge Max Holloway at UFC 218 in Detroit, has been removed from the event due to injury. Making matters worse, former bantamweight champ Dominick Cruz, who had been scheduled to compete just weeks later at UFC 219, is also hurt. That means his bout with Jimmie Rivera in Las Vegas is also scratched. MMA Fighting confirmed news of Cruz’s withdrawl Wednesday.

It’s a double whammy at a time when things were just starting to look up for the UFC. UFC 217 was to be their turning point, the event that got the promotion back on track. Now, they’re out two big fights. UFC 218, taking place at the Little Caesars Arena in Detroit, MI on December 2, is the more immediate problem. Just under a month away, featherweight champion Holloway now lacks an opponent in the evening’s main event. While Edgar is expected to avoid surgery for the undisclosed injury that knocked him off the card, he’ll be out roughly twelve weeks. Given the event needs a headliner, it’s likely someone else will get the opportunity to step up.

Holloway was insistent that he’d stay on the card in a post to social media:

Detroit, you guys are a bunch of tough mfers. I met many of you last month when we visited. You guys deserve the best fight card of the year and youre still gonna get it. I'm fighting no matter what

Former champion Jose Aldo and popular featherweight Cub Swanson would be viable options, but both currently have fights scheduled. Swanson is set to headline UFC Fresno later this year.

UFC 219’s Dominick Cruz, meanwhile, suffered a broken arm that will keep him out of action for a while. Cruz has not entered the octagon since losing his 135lb title to Cody Garbrandt at UFC 207 late last year. The injury leaves the surging Jimmie Rivera (21-1), who is undefeated in the UFC, without a dance partner.

UFC 219 takes place at the T-Mobile Arena in Las Vegas, NV on December 30. The card does not yet have a main event announced. 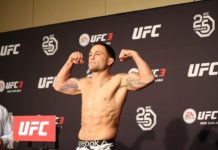 Frankie Edgar vs. Pedro Munhoz Off UFC 251, Pushed Back to July 15