During Saturday’s UFC Vegas 65 broadcast, it was revealed that coach James Krause was “suspended” and removed from the card, where he was supposed to have cornered Miles Johns.

The question now is, who removed Krause from the event, and why?

While the UFC Vegas 65 broadcast said Krause was “unable to attend” the Fight Night show at the UFC Apex in Las Vegas, Johns said during his post-fight interview that Krause had been suspended.

Speaking to media outlets backstage, Johns, who was victorious on the night, explained that “I’m not really sure of the details about what exactly happened. They just called him last night and said that he was unable to corner me today.”

The head coach of Glory MMA and Fitness has been under scrutiny due to the whole Darrick Minner situation. Minner turned up injured at UFC Vegas 64 a few weeks back, falling in the first round after a wave of suspicious betting activity flooded sportsbooks. Krause is an avid betting enthusiast, creating a very bad look for one of MMA’s most successful coaches. The Nevada Athletic Commission, meanwhile, has signaled that it intends to pursue some form of sanction against Minner for not disclosing the injury.

What’s unclear at this time is just who suspended Krause — the promotion, or the Nevada commission. Miles Johns was not aware himself, saying “I honestly don’t know” when asked for clarification. Commission officials did not respond to a request for comment on the status of Krause’s license as a second prior to this piece being published (it being a weekend and all, that may still be forthcoming and will be updated accordingly). UFC officials approached Saturday were unaware of the suspension, suggesting it did not originate from their side.

According to a report by ESPN gambling writer David Payne Purdum, however, the promotion pulled Krause’ credentials. Meanwhile, a conflicting report by Yahoo! Sports suggested it was the commission who made the move.

“Multiple sources told ESPN that the UFC denied credentials to coach James Krause, who was expected to be in the corner for fighter Miles Johns today,” Purdum wrote. “Krause, a known bettor, was in the corner for a Nov. 5 fight that was flagged for suspicious betting and is under investigation.”

That report has not been verified (it was later updated to note that Krause did not corner Minner, though he is the fighter’s head coach), and as noted, UFC officials were unable to confirm when asked about the issue Saturday. However, the commission pulling Krause’s license as a second would seemingly make more sense, given they had already signaled their intent to pursue action against Minner for failing to disclose his injury.

The UFC continues to investigate the shift in betting activity ahead of the Minner fight with partner organization Don Best Sports, a betting integrity firm. 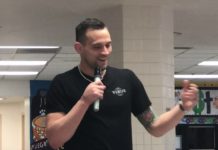