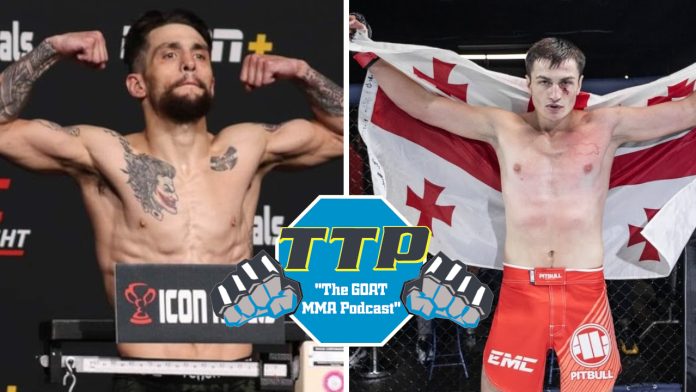 Kicking off this week’s edition of the Top Turtle MMA Podcast, Jay Perrin joins the show. The UFC bantamweight discusses all that went into his short notice debut – an exciting affair with Mario Bautista that led to a decision loss. He discusses his major takeaways from that fight and what he felt he had to get back and fix. He then shares his desire to go out and put on a live show for the folks in Salt Lake City for UFC 278. Perrin expects his opponent Qileng Aori to bring the fight, and he’s planning on going out with his shield or on it. Don’t miss this fight.

The UFC stays on the road for the second consecutive week for UFC 278. The fight card will take place live in Salt Lake City with Kamaru Usman and Leon Edwards main eventing in a rematch. We’ll break down that fight as well as two other top notch fights as part of out favorite segment – ‘Fights, Dogs, and Parlays’. As the name suggests, we’ll also hit you with our favorite underdog and parlay to make your wallet fat this weekend. For this segment, odds via FanDuel Sportsbook.

Closing out this week’s episode of Top Turtle MMA Podcast is an interview with Amiran Gogoladze. Although the Georgian isn’t on the UFC 278 fight card, he does fight just a few days after on the Contender Series. He discusses what getting that call to be on the show was like. He also shares a message that he’s prepared for Dana White (which he delivers in perfect English). In addition to all the Contender Series goodness, Gogoladze also talks about what got him into fight. He shares his thoughts on all the great Georgian fighters in the UFC and how they inspire him.