“Maverick” has done something few fighters on the regional circuit have managed during the pandemic era: he’s both stayed busy, and found ample success. While his peers have struggled to find fights, Canada’s Assenza has worked both sides of the border, even applying for dual citizenship with the U.S.

At BTC 15 on Saturday, Assenza (16-6) had his homecoming, capping off a night that crowned a $10,000 bantamweight tournament winner and saw multiple stoppages with a first-round TKO over American veteran Dominic “All Day” Clark.

Getting a finish was key, and not just because he’s knocking on the door of the major leagues.

“In general, I’m not happy unless I get a finish. So if it goes to decision, I’m not happy with my performance,” Assenza told Cageside Press following the event. “I know I had a fight or two recently that went to a decision, and I wasn’t happy with it. So getting the finish is always crucial.”

It was a short night at the office, but really, it couldn’t have gone any better for the 34-year old. “It ended quicker than I thought it was going to end, but another day in the office,” said Assenza. Now, he’s waiting for the call.

“I’m looking for the UFC to call me,” Assenza stated when asked what was next. “Call me, give me a fight, me a shot. I’m ready to go.”

It certainly seems like he is. After more than a decade in the sport, Assenza has been on a tear, knocking off veterans, an undefeated opponent, and a UFC alum in Cody Pfister on his current win streak. With little left at the regional level, he’s willing to do what it takes to break into the big show.

“I’m hoping just to get something short notice, or a fight in Canada if they come to Canada, something like that,” Assenza stated. And a spot on the rumored Toronto card this fall certainly appeals to him.

“Toronto’s what, 40 minutes from here? I fill this stadium [Burlington’s Central Arena] no problem, so I know I can bring all these people, ticket sales to Toronto for the Toronto show, for sure,” he noted.

As for his success, both at finding fights and winning, during the pandemic, it all boils down to the fact that Adam Assenza is always looking for a fight.

“In general staying busy in this sport ensures success. I’m always looking for a fight. I signed with those guys down in the States and I went down there and fought both of their champions, their Northern champion and their Southern champion. I’ll probably end up defending there next; I just like staying busy in general.”

That, of course, is if the UFC doesn’t come calling.

Watch our full BTC 15 post-fight interview with Adam Assenza above. 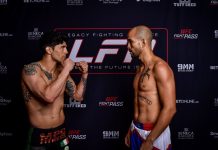 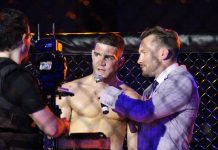