Jackson spoiled Dan Argueta’s UFC debut by defeating him via unanimous decision at UFC Vegas 56 on Saturday. He was originally scheduled to face Darrick Minner, but Jackson asked to stay on the card when Minner pulled out, and Argueta stepped up on a week’s notice.

Jackson was thankful to Argueta for taking the fight up a weight class.

“Hell yeah [I give him props for stepping up]. I try to say things like that because it should be expected if you’re a newcomer to step up on short notice,” Jackson told Cageside Press. That’s where you make your name. So it’s like, for him- I think they ran it by like, I think eight different guys. So you know, you got a 135er stepping up; props to him. He’s a strong kid, like, for 135, guys are gonna have trouble with him. You know, I was doing good with controlling him, but he was stout.”

The win over Argueta was Jackson’s third in a row, the longest winning streak in the UFC thus far, and he is proud of it.

As for what is next, he wants to fight on July 30 at UFC 277 in Dallas very badly. He would even let his kids come to the fight.

“Man, Dana [White], Sean [Shelby], give me the Dallas card,” Jackson said.” People don’t know this, but I was born and raised about an hour from Dallas. So having a fight, there is as close to a hometown fight as I could ever get. My entire pro career has been based out of Dallas. I was three when I moved to Dallas, and then, you know, I’ve been fighting there since 2013. So it would just be incredible to fight in the American Airlines Center. I’ve watched so many [Dallas] Mavericks games there, so many Stars games. So it would just be cool as hell.”

“And I told my kids..I would never let them come to the apex; I would never let them go to a different country to watch me fight. But I was like, ‘if I fight in Dallas, you guys can go; we’ll get a box. We’ll just sit you guys up in the box, and that you can go, you can see.’ I think it’d be so cool. To fight in Dallas and to be in front of my family and friends it would be awesome.”

As for who, Jackson wants Darren Elkins.

“I want Darren Elkins. I’d love to have that fight. He’s the guy that you call, and then he’s gonna be ‘yup, I’ll be there.’ He’s down to fight. I know he would bring the fight for sure. And I would love that fight.” 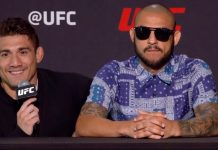 Dropping to 135, Cub Swanson Has Dan Argueta Fill In For Him At UFC Vegas 62 Media Day