BTC’s $10,000 tournament came to an end at BTC 15 on Saturday, with undefeated Niagara Top Team fighter Vinny Dias walking away with the novelty check.

And a trophy bigger than he is.

Dias (4-0) went the distance with Albaraa Atmeh in the tournament finale, winning a unanimous decision. It was a grueling, grinding affair, with Dias putting the previously undefeated Atmeh against the fence and wearing him down through much of the fight. He would land an emphatic slam takedown in the second, and by the end of the round — which finished with Dias on the back, body lock firmly in place — he was out to a seemingly insurmountable lead.

The win brought to a conclusion a journey that began last November, with the bantamweight tournament quarterfinals at BTC 13 in St. Catharines, Ontario. The $10,000 in prize money is a rare sum in regional MMA, especially in Canada — but, Dias told Cageside Press after the fight, the money didn’t matter, and it certainly didn’t change anything for him in terms of preparing for the fight.

In an interesting twist, Dias defeated Albaraa Atmeh’s brother, Izzudeen, in the semi-final round.

As for where the money will be spent, “training,” Dias told us post-fight. With four straight wins and a tournament title under his belt, moving forward, he’ll go where the money is. “Who ever’s got the biggest cheque,” he said when asked where he wants to compete next. 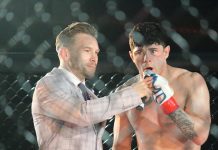 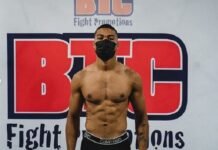