The bout was announced by the UFC via social media on Monday. The fight had been in the works for some time, with both fighters agreeing to the match-up previously.

Whittaker (23-6) is coming off losing a rematch against current middleweight king Israel Adesanya at UFC 271 in February. Prior to that he had put together a 3-fight win streak with wins over Kelvin Gastelum, Jared Cannonier and Darren Till.

Vettori(18-5-1) notched a win against Paulo Costa in October 2021. Vettori has had fights fall through since, the original bout against Whittaker included, but he returns to the octagon in Paris.

Three other bouts expected for UFC Paris include a flyweight bout between #1 contender Katlyn Chookagian and #6 Manon Fiorot. A heavyweight showdown between Ciryl Gane and Tai Tuivasa is widely expected to headline the event.

The remaining match-up is a middleweight fight between Makhmud Muradov and Abusupiyan Magomedov. 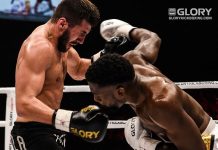