A fight between two of the bigger names in the UFC’s heavyweight division is in the works for a September 3, 2022 UFC event in Paris, France.

Former title challenger Ciryl Gane will headline the event against the streaking Tai Tuivasa. News of the match-up was first reported by journalists Ariel Helwani and Al Zullino.

Gane (10-1) is coming off the first loss of his career after he fell short challenging heavyweight champion Francis Ngannou at UFC 270 this past January. Prior to that, Gane was 7-0 in the UFC against the likes of Junior Dos Santos, Alexander Volkov, Jairzinho Rozenstruik, and Derrick Lewis to name a few.

Australia’s Tuivasa (14-3) has rattled off five straight finishes against Stefan Struve, Harry Hunsucker, Greg Hardy, Augusto Sakai and most recently a KO win over Derrick Lewis at UFC 271. His popularity has skyrocketed during that stretch, with his post-fight celebration “shoey” catching on worldwide.

Tuivasa, a fan favorite, would take on Gane in the latter’s home country of France. Ciryl Gane and Tai Tuivasa are ranked #1 and #3 in the promotion’s heavyweight division, respectively.

No other bouts have been announced for the promotion’s first event in France. The European country finally legalized MMA in 2020 after years of push back from the French Ministry of Sport. 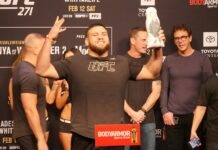