Michigan native Klose got back into the win column in a big way last month, finishing Brandon Jenkins to capture a Performance of the Night bonus. The fight was the first for Klose in over two years, thanks in part to a shove at weigh-ins by Jeremy Stephens ahead of their planned showdown at UFC on ESPN 22 last April. Klose was left dealing with a neck injury; Stephens has since been released by the UFC and debuted for the PFL.

Brazil’s Diego Ferreira is badly in need of a win come July. The former Legacy FC lightweight champion joined the UFC in 2014 and got off to a very good start. From 2016 to 2020, he embarked on a six-fight wins streak that included a win over former champion Anthony Pettis.

During the pandemic era, however, Ferreira has struggled, losing three straight fights. Most recently, he suffered a TKO loss at the hands of former KSW star Mateusz Gamrot. 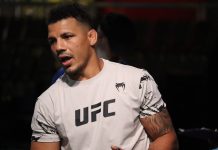