While he didn’t win the championship, lightweight Clay Collard certainly saw his stock rise during the PFL’s 2021 season. As a result, he’d landed in the main event at PFL 1, 2022 against promotional newcomer Jeremy Stephens.

After a lengthy career in the UFC, “Lil Heathen” was fighting in a new home for the first time in well over a decade.

It was no doubt little surprise to longtime MMA fans, but Jeremy Stephens was swinging hard and heavy early to open up the PFL 1 main event. He would also jab to the body and fire a number of low kicks, pulling out to an early lead. A right hand then appeared to hurt Clay Collard, but rather than cover up he fired a combination right back at Stephens!

Collard would add in a low kick of his own, rip the body, and fire a high kick that was blocked. Collard went back to the body, fire his jab, then went body-head as Stephens kept his guard high. Stephens landed a right hand by the ear, but Collard kept coming. An accidental headbutt then had Stephens complaining to the ref, which earned a time out.

Back underway, Stephens took some big swings, backing Collard up to the fence. It was a real surprise that neither man went down in the exchange that ensued; Stephens then began complaining about another headbutt. Collard ripped the body after the ref let them continue, then fired a jump knee, and Stephens was suddenly under heavy fire.

Late in the round, Collard went after a takedown, couldn’t land it, but fired a punch over the top, followed by a few hooks that forced Stephens to retreat. A clinch in the dying seconds saw Collard landing more knees.

The second round opened with another foul, this time a low blow by Stephens. Collard declined to take much of a time out. Instead, he punched his way in, landing a knee in the clinch. Stephens fired a right hand that landed. Collard landed to the body. Another knee for Collard. Stephens went to the body this time. Stephens then landed a huge right hand! Collard was hurt, Stephens moved in for the kill, but somehow Clay survived. He fired a number of jabs and backed Stephens up; Stephens reversed and sunk in an underhook. They’d break, and Collard was on the attack again, more punches than not landing. Collard looked to jump in with a knee, but landed short. A good thing too, as Stephens uncorked a monstrous uppercut that hit air. He’d get caught a moment later, then changed levels and briefly took “Lil Heathen” down.

Back on the feet, Collard ripped the body. The pair traded. Stephens backed up and reset. Collard threw out a leg kick. They clinched, with Collard landing an uppercut. Stephens got a body lock in place, but Collard used a kimura grip, then turned the corner and dumped Stephens. He was right back up, but the round came to a close seconds later.

Through two rounds, Clay Collard and Jeremy Stephens had fired everything they had at one another. Exactly the sort of match-up the PFL, and its fans, had hoped for when they put this pair together. Round three was no different.  Collard split the guard, landing an uppercut. Stephens landed a right hand, and fired a couple of leg kicks. Collard launched a spinning back kick, and spinning back fist. In a clinch, the knee was there for Collard again. The knock-down, drag-out brawl continued. A bit of trading in the pocket. Both men landed upstairs. Chins were holding. Stephens landed his left, and later went to the body.

With about 90 seconds left in the fight, Stephens went to the body, backing Collard up. He then dropped to pursue a takedown; Collard again went to a kimura to escape, but couldn’t reverse. Instead, he ate a wild Stephens punch on the way out. Collard showed a bit of fancy footwork, fired a spinning kick and slipped. Stephens came on late, landing a back elbow, technically illegal under the PFL’s regular season rules.

A full fifteen minutes of brawling, and the final fight of the PFL 1 card headed to the judges. Collard took all three rounds in a unanimous decision win, but Stephens proved he can still take a punch, and land a boatload of them. 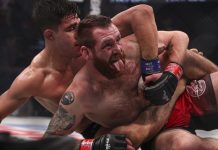