El Hadji Ndiaye was born in Senegal, with his family soon moving to Belgium, where he spent most of his formative years. In 2014 Ndiaye relocated to France, and that’s where he’s still residing today — now married and with a three-month-old son.

Ndiaye was first introduced to MMA by watching UFC and Pride fights. He began practising in Judo, Kung-Fu, and has a black belt in Taekwondo. Prior to making his MMA debut in 2017 he was a French Pankration champion in 2016.

Jumping straight into MMA following his Pankration title he felt he rushed it a bit which is why he lost his first fight, he told Cageside Press recently.

“When I fought my first MMA fight I was not well structured, I ended up losing. I ended up amassing a record of 12-2 as an amateur. Additionally, I had a lot of competition in grappling, particularly Brazilian Jiu-Jitsu and Pankration.”

Ndiaye is now 4-0 as a professional. Although he has a nice-looking undefeated record, he hasn’t fought since November of 2019. According to him, COVID-19 was partly the problem, but more so had trouble finding opponents willing to step in the cage with him.

“When I won my first and second professional fights. It gave me a huge desire to one day become a world champion, at whatever cost. From where I was at the beginning of my career I believe that I am more strategic, complete physically and mentally than before.”

Ndiaye has trained at various training facilities mainly crafting in individual disciplines to get the best training. Recently he’s been training out of NRFight Club Paris under head coach Nicolas Renier.

For the biggest fight of his career and a heck of a return to the cage, he’s fighting for the major UK promotion Cage Warriors this Saturday. A key goal that Ndiaya has reached, and he’s ready to make the most of the opportunity.

It was one of my objectives to compete with a promotion such as Cage Warriors, so I am
extremely happy. It is a big opportunity and a springboard to eventually sign to the UFC.
I am grateful to my manager Ajay Chander (EPOK Agency) for making this happen for
me.”

His opponent on the other side of the cage is England’s own Adam Cullen. Cullen is highly-regarded training out of the same camp as Paddy Pimblett and many others in Next Generation MMA Liverpool. Ndiaye, safe to say, is not a fan.

“Adam Cullen is a real clown; he has never faced an opponent like me. This fight will not go to a decision. Adam is weak, so he tries to show the opposite by trash talking on social media.”

The fight footage of Ndiaye online is lacking, so the majority of fans watching Cage Warriors 136 will be seeing him compete for the first time. When talking to Ndiaye about the bout, he promised a big fight and a great show no matter who he’s fighting for all the new fans. Although he’s not well-known at the moment, a win here puts him right on the map.

He also believes he can land in the UFC relatively soon.

“I fight because it remains a challenge that allows me to surpass myself. In less than three years, I’ll be in the UFC.” 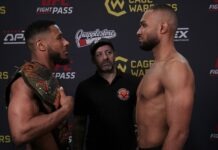 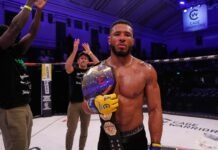