For dos Anjos (31-13), making the adjustment from Rafael Fiziev to Moicano was no easy feat, he told media outlets including Cageside Press following the bout.

“Feels good, man. It was hard for me to take that fight on short notice. He was a totally different guy than I was training for,” dos Anjos explained. “Fiziev’s a shorter guy, Muay Thai fighter, all of a sudden comes Moicano, taller, good jab, Brazilian jiu-jitsu black belt. It was kind of hard to make those adjustments, but I’m pretty happy I got it done.”

That said, there was “zero” chance of dos Anjos taking the fight, he stated. “I told Dana White, I told Sean Shelby, I’ll fight anybody.”

Many watching the fight at home were calling for it to be stopped by the later rounds. Moicano had taken a beating, and one eye had begun to swell. It was bad enough that dos Anjos himself was hoping the doctor would call off the bout.

“I really wanted the doctor to stop it, but they didn’t. But I gotta do what I gotta do, unfortunately,” he stated. “I was trying to finish the fight, but the guy’s tough as nails.”

As is dos Anjos himself, who has now won both his fights since returning to the lightweight division next year. What’s next could get interesting: the Brazilian has flirted with a lightweight match-up against Islam Makhachev for years. That fight came close to happening at UFC 272, with Makhachev throwing his name in the hat when Fiziev dropped out of the fight.

It doesn’t seem likely to happen any time soon, however, at least in dos Anjos’ opinion.

“Looks like Islam’s going to fight Beneil Dariush, right? He had a chance to fight me tonight, he didn’t. At 170 pounds, I took the fight, they don’t,” he stated. And so when it comes to what’s next, “I don’t know,” the former champ continued. “Looks like Conor [McGregor]’s coming back in the summer, that could be a good one. Title fight’s already scheduled. We’ll see, man.”

“A lot of things can happen. I just want to be active, I want to be training. I need good names. I’ve been in this game for so many years, fought everybody in two divisions. I need names that make me want to go to the gym and train hard for it. That’s what I want.”

In terms of what keeps him going in the sport, meanwhile, dos Anjos told Cageside Press that “I think I have the heart of a fighter. That’s what I do for a living. I never did anything different pretty much my whole life. And I don’t pick fights. The UFC calls me with an opponent, and I take fights. Being on this level of competition that I am, I can’t really pick fights, and I never did.”

Watch the full UFC 272 post-fight press conference with Rafael dos Anjos above. More coverage from the event can be found below. 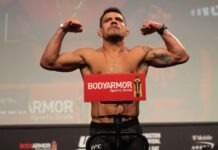