Fireworks will be guaranteed thanks to a thrilling match-up between two featherweights at the UFC’s April 23, 2022 Fight Night event.

Multiple sources, speaking on the condition of anonymity, have confirmed to Cageside Press that Charles Jourdain and Lando Vannata will face off on the Las Vegas-based card.

Jourdain (12-4-1) was the talk of the MMA world in late January as he was going to step in on very short notice to fight Ilia Topuria at UFC 270. Unfortunately, Topuria was pulled from the card due to weight management issues.

The Canadian went 2-1 in 2021 with his most recent win coming against Andre Ewell on December 18. He won the fight via unanimous decision. Jourdain signed a new four-fight deal after his December fight.

After ten fights at lightweight, Vannata (12-5-1) made his featherweight debut at UFC 262 last May. He faced Mike Grundy, winning the fight care of a split decision. Vannata said he felt rejuvenated at his new lower weight class and that it will be his new home moving forward. “Groovy” was scheduled to return in November against Tucker Lutz, however, the fight was canceled and Lutz was rescheduled.

The UFC’s April 23, 2022 show is set to take place at the Apex in Las Vegas. The card is set to be headlined by a women’s strawweight showdown between Amanda Lemos and ex-champ Jessica Andrade. Jourdain’s countryman, Canadian heavyweight Tanner Boser, will also be in action against Rodrigo Nascimento. 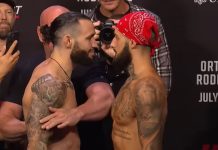