Former Invicta featherweight champion and one-time UFC title challenger Felicia Spencer announced her retirement on Wednesday afternoon in an interview with FightBananas.  “The Feenom” leaves the sport after accumulating a 9-3 record overall and having headlined a UFC pay-per-view during her run.

“I have decided to stop pursuing this opportunity and have no intention to continue fighting. I felt as good as I’ve ever been in my last fight, and know I could have more great performances, but after 18 fights, including a few “wars,” I know in my heart for my future mental health that I shouldn’t be in more of those wars. In the fight game that isn’t guaranteed, and I’ve shown myself that I won’t give up in the cage, so I need to protect myself by just not stepping in there. I’m thinking about myself and family 25 years from now. Mental health is an important consideration in my family.”

Born in Montreal, Quebec, Canada, Spencer began her training in martial arts at the age of four in Taekwondo with her siblings before eventually training in the more traditional disciplines of MMA like Brazilian Jiu-Jitsu as a preteen.  She became a professional in 2015 in Invicta FC where she opened her career at 6-0 and defeated future champion Pam Sorenson to win the vacant title.  The victory earned her a ticket into the UFC where she had a successful debut in submitting Megan Anderson in the first round.  She would later split fights with a loss to Cris Cyborg and a victory against Zarah Fairn dos Santos.

Spencer’s most high profile fight came in 2020 where she challenged Amanda Nunes for the UFC bantamweight championship.  It would be Spencer’s first and only UFC headliner as well as her only title fight within the promotion.  Spencer went on to lose the bout via unanimous decision.

Earlier in 2021, Spencer lost to Norma Dumont who replaced Danyelle Wolf in the bout; most recently she stopped Leah Letson in mid-November to get back in the win column. 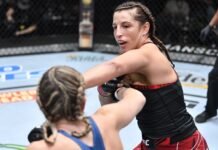