Max Holloway defeated Yair Rodriguez by decision in the main event of UFC Vegas 42. Solidifying himself as a serious contender for the featherweight title in the near future in the process. In the co-main event, Marcos Rogerio de Lima knocked out Ben Rothwell. Today we will be looking into what is next for the winners of UFC Vegas 42.

Max Holloway is now 2-0 since his back-to-back losses against current champion Alexander Volkanovski. He was already ranked as the number one contender in the division before his win over Rodriguez. Unless the UFC wants to see him fight a guy like Brian Ortega first, Holloway’s next fight will likely be for a title. Dana White suggested as much following the event.

His win this past weekend brings de Lima’s UFC record to 8-6. He is currently riding a two-fight win streak defeating two big opponents in Ben Rothwell and Maurice Greene. De Lima has a black belt in jiu-jitsu and power in his hands. He is a serious threat to anyone he faces in the heavyweight division. Alexander Romanov is 4-0 in the UFC and has a similar skill set as de Lima.

Romanov is 15-0 and has finished 14 of his 15 wins. Six of those wins by knockout and eight of them by submission. Romanov is a great grappler and would probably have a slight grappling advantage over de Lima. A striking match between the two is a potential fight of the night candidate on any card it lands on.

Felicia Spencer was able to finish Leah Letson in the third round of their featherweight bout at UFC Vegas 42. Spencer is now 3-3 in the UFC with her only losses being to Cris Cyborg, Amanda Nunes, and a split decision loss to Norma Dumont. The UFC is very thin at the women’s featherweight division. Many of the women they have signed to that division are new to the UFC and don’t have the credentials to match up against Spencer.

It would be great to see Spencer fight someone like Aspen Ladd in her next fight. Ladd needs to move to the featherweight division anyway. She is currently coming off a decision loss to Norma Dumont in October. Dumont is likely next in line to get a shot at the 145lb title but the winner of Ladd versus Spencer could be right behind her.

Khaos Williams won himself a Performance of the Night bonus for his third-round TKO over Miguel Baeza this past weekend. This win puts him on a two-fight winning streak and makes him 4-1 in the UFC. His only UFC loss comes at the hands of Michel Pereira back in December of 2020. He has seven knockout victories and has never been finished in his professional career.

Li Jingliang is a welterweight that has never been knocked out in his career and has nine knockout wins. He is coming off a submission loss to Khamzat Chimaev in late October. Jingliang has four Performance of the Night bonuses and two Fight of the Night bonuses in his time with the UFC. If Williams would like to keep having exciting fights, Jingliang would be perfect for his next opponent.

Song Yadong finished Julio Arce with a head kick in the second round of their bout at UFC Vegas 42. Yadong is now 7-1-1 in the UFC and is currently on a two-fight win streak. With an almost perfect record in the UFC, his only loss came to Kyler Phillips and the draw on his record came from his fight against Cody Stamann.

Chris Gutierrez is 5-1-1 in the UFC and his only loss was a submission loss in his UFC debut against Raoni Barcelos. Gutierrez has never been knocked out in his career and holds wins over guys like Felipe Colares, Andre Ewell, and Vince Morales. Gutierrez has great cardio and striking which should match up great against Yadong. 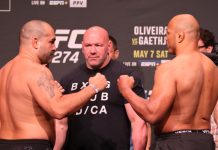 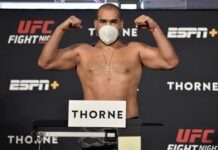