For the second time in mere weeks, a UFC event featured a women’s featherweight fight. The question surrounding Felicia Spencer vs. Leah Letson at UFC Vegas 42 was whether it signaled signs of life in the division — or was the last gasp for a dying weight class.

Spencer, a former title challenger who came up short against Amanda Nunes, had shockingly dropped a decision to Norma Dumont earlier this year. With two straight losses, the Canadian needed to get her hand raised to save her spot in a weight class that really had all of five fighters in it.

Letson had last competed at the finale of The Ultimate Fighter 28 in 2018, where she earned a win over Julija Stoliarenko. But despite TUF 28 featuring women’s featherweights, the bulk of the cast wound up moving to 135lbs following the season. Letson was booked into a couple of fights the following year, but had to pull out of both.

A win for Letson could see her matched up with Dumont, who recently defeated Aspen Ladd in the latter’s 145lb debut. Or matched up with boxer Danyelle Wolf, who was still waiting for her first fight under the UFC banner.

Spencer punched her way in to open the fight Saturday, getting right on Letson. While she didn’t do too much damage, she had Letson in defense mode. “The Feenom” then bullied Letson to the cage, dropping levels looking for the takedown and grinding down her opponent. While she couldn’t land the takedown even after a significant amount of time working on it, she did find success with elbows in the clinch. Several of which absolutely smashed a very tough Leah Letson.

Spencer put the fight right back on the fence early in the second. This time, she got Letson down. While Letson was getting up, Spencer nearly took the back, which led to Letson fighting a wrist. She was able to turn that into her own takedown, but Spencer was up and out in moments. After another extended sequence again the fence, Spencer would land a takedown with about 90 seconds left in the round. Letson was up shortly after, but through nearly two rounds, her offense had been limited to just a short bursts. Spencer finished the second with another takedown, capping that off with a heavy knee as Letson moved up.

Letson ripped off a kick then powered into a takedown to open round two. That marked her biggest moment in the fight, and she went to work in guard with a full round ahead of her. Letson went body-head with her punches while Spencer looked to free herself. The former Invicta champ reversed, and began raining punches down on Letson as she moved to a knee then stood up. The punches never seemed to stop, even when Letson spun right around to avoid them. Mixing in elbows, Spencer soon had her opponent bloodied and battered, back against the cage. Letson eventually found space for a moment, landing a right hand, only to be taken down again with all of a minute and a half left in the fight. Spencer was in half guard, moved to mount, dropped some hard elbows, and brought in the ref!

Just POURING it on 👊

No signs of let up from @FeeNom479 this round. #UFCVegas42 pic.twitter.com/XbGcRhK3mg

For Spencer, it was a strong return after two straight losses. A performance that saw her set a personal best in strikes, with over 100 across just under three full rounds. Letson, meanwhile, goes back to the drawing board, but could be a good candidate for the yet-to-debut Wolf. 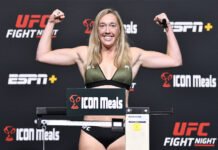