Even at 46 years old, Cheick Kongo has shown that he remains a threat in Bellator’s heavyweight division.

“The Darkness” topped the Bellator 265 card on Friday night, paired up with fellow veteran Sergei Karitonov. Despite being five years the Russian’s elder, Kongo engaged in a lively stand-up battle, endured a toe poke to the eye, and wound up securing a second round submission — just the fourth in a career that now features 31 wins.

Also on Friday’s Bellator 265 card in Sioux Falls, South Dakota, Jornel Lugo pulled off his own impressive submission win against Keither Lee. The rear-naked choke put Lee to sleep right at the end of the opening round, and leaves Lugo in a good spot ahead of a proposed bantamweight grand prix, which could start sometime next year.

Brazil’s Marcelo Golm, meanwhile, finally made his promotional debut Friday. With dates changing and a litany of opponents falling through (Linton Vassell, Steve Mowry, and Kelvin Tiller), Golm got down to business with Billy Swanson, earning a first round TKO victory.

Full results and a gallery of highlights from Bellator 265 can be found below. 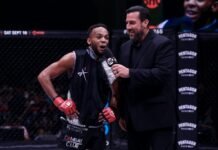