Nearly three years on, Ryan Bader and Cheick Kongo finally ran back their 2019 heavyweight title fight, which ended early in a disappointing no contest due to an eye poke.

At Bellator 280 on Friday, Kongo got a second chance at Bader — and a third opportunity to claim heavyweight gold in Bellator MMA.

Both men were light on their feet early, but about a minute in, Bader had the fight where he wanted it, putting Kongo against the fence and taking his legs out from under him. Kongo was right back up, but Bader stayed on him, throwing knees and looking to sweep a leg. He finally just dragged Kongo down, but Kongo defended with a blatant fence grab — blatantly illegal, clear as day, but unpunished by the ref. A grazing knee strike by Bader then landed low, leading to a brief pause.

Back underway, Bader was back on Cheick Kongo, riding out the end of the round controlling the back.

In the second, Bader worked his way forward, backing the challenger up to the fence. But a Kongo uppercut grazed Bader; a moment later, he was in on a takedown, landing it. Kongo was quickly up to one knee, but Bader put his weight on the French fighter. Nearly the entire round would play out in this fashion, with Kongo having to carry the champion’s mass in addition to his own.

Round three opened with a Bader jab to the body. Kongo fanned on a kick, but he already had his back to the fence. Bader ensured there wasn’t enough room between them for Kongo to work, and tied him up seconds later. From there, it was plenty of wrestling, with Bader in the driver’s seat, though Kongo would free himself with about 90 seconds left in the round, getting a bit of space in which to work. Kongo landed a leg kick, then another, but Bader closed the distance.

The championship rounds started out the same. Bader implemented his game plan, putting Kongo against the fence and getting him down. Kongo sat with his back to the fence as Bader controlled the wrists. Kongo wound up searching for answers, including how to get off the ground, for essentially the entire round. Leading to the final five minutes, and an obvious need for a Kongo finish.

With that in mind, Kongo came out in the fifth, looking to land a knockout blow — but before he could get much off, it was a Bader blast double-leg that took the fight to the mat. Kongo had his back to the fence, got to a knee, powered up, but Bader was right back on a leg. Kongo fired a few short elbows at the champ, but didn’t have space to put anything behind them.

Instead, it was Bader dragging Kongo back down. He’d get up again, only to be dragged back down again — the story of the fight. A stand-up by the ref late in the round gave Kongo the faintest glimmer of hope, as he chased the champ, landing a couple of punches — but Bader tied him up again.  Kongo simply did not have an answer for Bader’s wrestling prowess, and as they went to the judges, Bader’s win was secure. 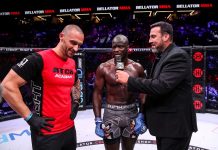