What is expected to serve as the UFC 267 co-main event is signed, sealed, and waiting to be delivered on October 30.

On Monday, MMA Junkie was first to report that Aljamain Sterling vs. Petr Yan 2 was officially booked. The news comes on the heels of Yan announcing he had signed a bout agreement for the fight.

UFC 267 bout agreement signed. Time to return what’s mine. No games with my prey this time.

News of the rematch first made the rounds back in July.

The pair originally met at UFC 259 in March, when, for the first time in promotional history, a title changed hands via a DQ when Yan connected with an illegal knee, leaving Sterling unable to continue. Prior to the blow landing, Yan appeared to have the edge on the scorecards.

In the lead-up to the fight, Yan (15-2) had won ten straight fights, including all of his bouts in the UFC, capturing the bantamweight title in the process. Sterling (20-3), a former CFFC champion, has now won six straight.

The ending of the pair’s first fight was controversial to say the least, with many contending that Sterling could have continued in the fight — despite the obvious severity of the blow, which came as he was a downed opponent. That has built up expectations for the inevitable rematch, which likely would have come sooner, were it not for Sterling requiring a disc replacement in his neck.

UFC 267 is set to take place at the Etihad Arena on “Fight Island” (Yas Island) in Abu Dhabi. The event will be a free “PPV,” or numbered event, the first time the promotion has given away such a major card in years. ABC is currently the expected broadcast destination in the U.S.

To date, the UFC 267 card breaks down as follows: 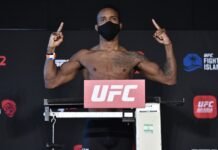