Alexander Gustafsson is back. Going back to his normal weight class, light heavyweight, that is.

Swedish outlet Front Kick was the first to report the news that two-time title challenger Gustafsson will make his return light heavyweight against No. 12 ranked Paul Craig.

Gustafsson (18-7) returns to the weight class that he made his name in when he returns to the octagon. He was unsuccessful in his heavyweight debut, getting submitted by Fabrício Werdum in less than three minutes last year on ‘Fight Island.’ “The Mauler” will be in must-win mode as he is on a three-fight skid and hasn’t won since 2017 when he knocked out current No. 1 contender Glover Texiera and then proposed to his wife.

Craig (15-4-1) kept his 100% finish rate intact when he dislocated Jamahal Hill’s elbow last month at UFC 263. The “Bearjew” is riding a four-fight win streak and is on the brink of breaking into the top 10. However, he will be putting his No. 12 ranking on the line as he welcomes Gustafsson back to the division. 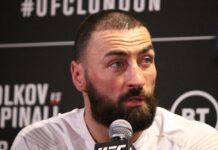 UFC London: Paul Craig Finds it “Wild” Opponents Continue to Go to Ground With Him