Less than a week after posting her GoFundMe, UFC bantamweight Sarah Alpar has exceeded her goal with help from Jake Paul and Triller.

What started as a request for assistance has become a major talking point in the ongoing discussion about fighter pay.  UFC bantamweight Sarah Alpar posted on her Instagram that she sought financial assistance for her career as a full-time fighter and in less than a week has received far surpassed her goal with help from generous donors.

A post shared by Sarah “Too Sweet” Alpar (@toosweetalpar)

Alpar posted the video on June 27 where she said that her GoFundMe would go towards helping her with travel, gym fees, and buying food.  “Too Sweet” is currently 9-5 and defeated Shana Young on Dana White’s Contender Series in 2019.  She lost her UFC debut last year against Jessica-Rose Clark.  Alpar had two consecutive opponents fall out in May before eventually being scheduled to face Erin Blanchfield on August 18.  Alpar originally set a goal for $1k by July which was quickly broken.  As of this writing, her GoFundMe sits at roughly $35k over an increased goal of $30,000 by December 1.

As her video made the rounds on Twitter and Instagram, social media star turned pugilist Jake Paul spoke out against the UFC to say that it was not right that a fighter should need to crowd fund for their career and compared it to how a professional in another league in the NBA would not be left in such a position despite being new to their company as well.  Paul also made a contribution to Alpar, donating $5,000.

SMH… Imagine a rookie in the NBA had to start a GoFundMe to play..

I let Sarah @TOOSWEET_Alpar know she has my support and contribution

It’s my honor and privilege to help fellow fighters in anyway I can🙏🏼https://t.co/XvDHOwoN6Q

“We are honored to help Sarah as she continues her march towards becoming a world champion. Sarah and many underpaid UFC fighters are starting at a disadvantage when they have to work multiple other jobs while putting their bodies and brains through the most rigorous training one could imagine. It’s sad to see such talented fighters making less than the UFC ring/round card girls.”

Paul has spoken out in recent months against the UFC to say that the promotion was underpaying fighters.  Triller attempted to make a fight between Oscar De La Hoya and UFC Hall-of-Famer Georges St-Pierre.  The UFC did not approve of the deal as St-Pierre is still under contract despite having been retired for several years.  UFC President Dana White refuted Paul’s claims and said that he has cut off communication with Triller and that they should focus on their own roster and not his.

Currently, Paul is signed with Showtime and is scheduled to face former UFC champion Tyron Woodley.  Woodley’s contract expired following his fight against Vicente Luque this past March and he has not re-signed with the company, although he did return to work at the analyst desk. 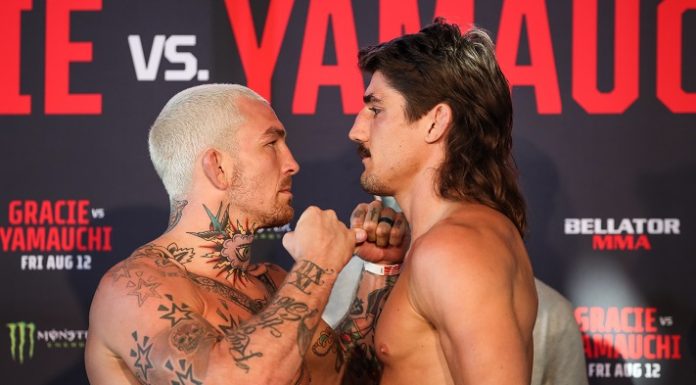