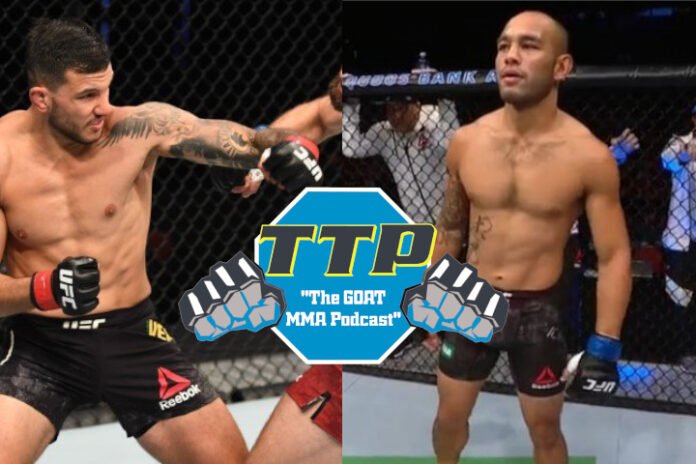 Kicking off this week’s show is an interview with Luigi Vendramini. The Brazilian native discusses building on his most recent win at UFC 263 and the stage that is set. Plus, he shares how he got into MMA and jiu jitsu at a young age. He also digs into his recent training camp at Factory X Muay Thai and how training away from family has been so difficult for him. His dad will reunite with him this weekend as one of his cornermen and he talks a bit about what that means to him as well.

You’ve seen the card. It’ll be one of the best this year. Top to bottom, it’s loaded with bangers. Gumby and Shockwave not only set the table for those fights, but let you know who they like to win all of the biggest fights. Then they get into which underdogs they like and there are a bunch on this card. Plus, they put together a plus-money parlay that is sure to make your wallet fat this weekend.

Closing out the show is an interview with Frank Camacho. Frank “The Crank” digs into how he has taken his recent losses and how his training was going. However, as many of you may know, Camacho was recently in a car accident that has pulled him from his fight this weekend at UFC 263 with Matt Frevola. This interview was recorded before he got in the accident, so it may not be entirely current on some issues. However, a chat with Frank is always a good time, and we wanted to be able to share that with you all.

In the meantime, we wish Frank a speedy recovery. All the best and we look forward to speaking again and seeing him back in there.