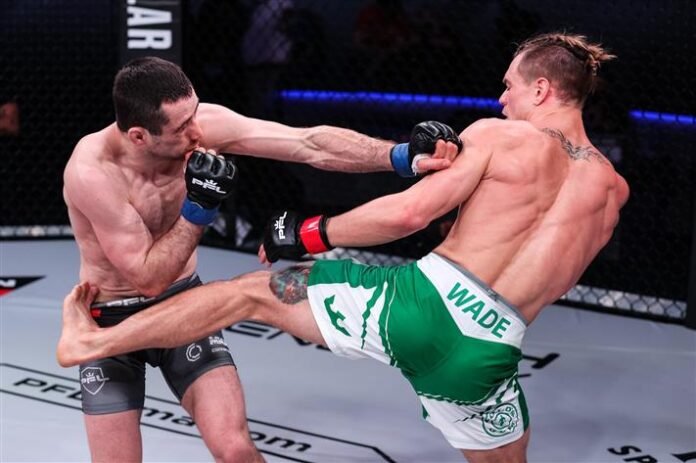 PFL 2021 #4 is scheduled to go down this Thursday, and there will be an absolute war going down between Chris Wade and Arman Ospanov.

Wade (18-6) has really cut his teeth within the PFL promotion. After a UFC stint from 2014-2017, the featherweight is now a PFL mainstay and has not looked back. With nine fights under the promotion, it’s safe to say that he’s been making requisite developments along the way. However, against the extremely talented striker Ospanov (11-3), he will need to be cautious of unorthodox strikes coming from odd angles.

Before the card kicks off, let’s take a closer look at the featherweight battle between Wade and Ospanov.

Unquestionably, Wade is durable and a crafty tactician inside the cage. Additionally, it will be intriguing to see how the “Long Island Killer” handles the wild striking techniques of Ospanov. Wade does possess the characteristics essential to combating a heavy striking game-plan. In particular, the 33-year old American is an opportunist with his submissions, and at times Ospanov can overextend in striking exchanges. If that happens to occur that is one viable path to victory for Wade this Thursday at PFL 4.

Since Ospanov’s movement is agile and quick, this will be a challenge for Wade because much of his game relies on closing the distance and slowing the fight down. Essentially, Ospanov is the opposite and prefers range so that he can land devastating strikes like elbows and knees. As an eight-point striker, Ospanov is dangerous in all three levels of striking distance (1.Close Range, 2. Mid Range 3. Outside Range). In the end, he will definitely give Wade a stiff challenge.

The fight will be determined by who enacts their game plan more effectively. At first, that seems like a vague statement, but it really couldn’t be further from the truth. If Wade can get the fight to the ground, it’s by no means a lock but should he can keep Ospanov down, then it will be his fight for the taking. However, after seeing the frenetic scrambling of the Kazakhstan native in his fight against Eskijew, certainly, that won’t be an easy feat to accomplish.