Phoenix, AZ — Jamahal Hill (8-0-1) returns for his fourth UFC fight this weekend at UFC 261 in Glendale, Arizona, and this fight has some extra heat on it.

Hill and Paul Craig were supposed to fight in March, but Hill had to withdraw due to COVID. With Hill withdrawing their fight, the trash talk started, and now the fight has become very personal.

There is no doubt that there is bad blood with this fight. There was even a little confrontation between the two before they spoke at media day.

While Hill doesn’t really like to give predictions, he did say he believes Paul won’t be able to handle his power and will get him out of the octagon in one or two rounds.

Watch the full UFC 263 media day scrum with Jamahal Hill above. The event takes place this Saturday, June 12, at the Gila River Arena in Glendale, Arizona. The main card airs live on PPV. 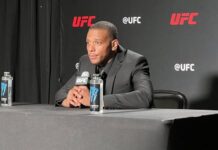