Just where Argentina’s Santiago Ponzinibbio stood in the welterweight division was the question heading into his fight against Miguel Baeza at UFC Vegas 28.

A seven-fight win streak that had put Ponzinibbio on the brink of title contention had evaporated in a puff of smoke following a knockout loss to Li Jingliang earlier this year. With an extended absence between 2018 and that January bout, Ponzinibbio could be forgiven for displaying a bit of ring rust — but Saturday night, he’d need to get past Miguel Baeza to reaffirm his standing at 170lbs.

Ponzinibbio got his jab going early, but ate a pair of naked calf kicks without answer in the first minute. If not more. Ponzinibbio continued to move forward with the jab, only to eat another pair of leg kicks. While his movement wasn’t hampered yet, if he continued to take those kicks, it was going to me. Baeza meanwhile circled on the outside, then shifted his approach and went on the offensive. Ponzinibbio was showing a sprinkling of color on his lead leg by the halfway mark, and already appeared to have a stutter in his step from the damage. When the Argentinian pressed forward again, Baeza quickly reverted back to the leg kicks. By the end of the round, the lightest kick to Ponzinibbio’s lead leg was tripping him up. That said, he managed to unload a few punches on Baeza along the fence just before the horn.

Round two opened with a Baeza calf kick. Then another. He landed a right hand a minute in, the Argentinian fighter an easier target with his movement impeded. Ponzinibbio answered back with a right hand of his own, but he was struggling to keep his offense consistent. At the midway point of the second, Ponzinibbio was hurt again, with Baeza taking some big swings. Baeza then went to the body with a kick. Later in the frame, Ponzinibbio added a heavy leg kick of his own, and began to take control, moving forward with a mix of single strikes of combinations.

The third frame opened with Ponzinibbio very much in the fight, depending on how the second round was scored. He landed a nasty leg kick just past a minute in that almost took Baeza’s legs out from under him. Baeza threw a couple of big punches in the ensuing exchanges. Ponzinibbio nailed another leg kick. He then went upstairs with a combo, and had Baeza hurt. Baeza battled back, landing a right hand. The fight was quickly becoming an “of the Night” contender. Ponzinibbio landed a left in the final minute. Then a 1-2 combo. Baeza fired back. Ponzinibbio’s lab was on point. They swung right to the final bell!

Fight of the night? Month? Year? 😳

👏 What a way to end this scrap! #UFCVegas28 pic.twitter.com/4eCJCePUHi

A thrilling end to a thrilling fight. Ponzinibbio took home the unanimous decision, two rounds to one. Some, including Baeza, will disagree, but regardless of outcome the fight was exhilarating. 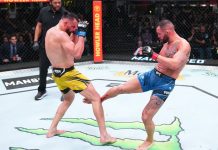 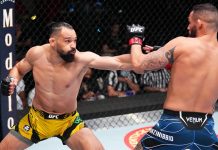