Following back-to-back losses to Muslim Salikhov and Tim Means, Laureano Staropoli was moving up to middleweight at UFC Vegas 28. That, after missing weight in the Means fight. Welcoming him to the division, hard-hitting Georgian Roman Dolidze — who had, in the past,  fought at light heavyweight.

Dolidze ate a Staropoli body kick to open the final middleweight scrap Saturday. But he’d capitalize moments later with a single leg takedown. Staropoli scrambled to his feet, but still had Dolidze hanging off him along the fence. Grappling was the story of the round, with Dolidze in control. Ultimately, it was the story of the fight.

The grappling and positional work continued in round two. Staropoli hung in there, but would slip off the break just as he was finding his groove. That would result in more work along the fence, with not a lot of action. The ref took a look, but opted not to break them up. In the final minute, there was a bit of an exchange at distance, but Dolidze then pressed his opponent into the cage again.

Round three had Staropoli looking to land a side kick. Dolidze fired a low kick back in his direction. That was followed by a second. Staropoli was at least staying at range, and away from the grappling of Dolidze. For the first two minutes anyway. After that, the Georgian fighter closed the distance, locked in a clinch, and was back in the driver’s seat. Staropoli managed to halfway escape, utilizing a headlock, but couldn’t break free. Dolidze would go on to win a clear decision. 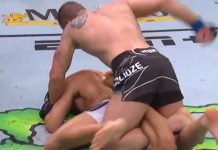 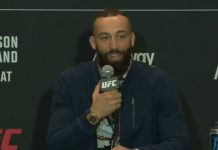