The August 14 UFC Fight Night gets its main event, as a pair of top 10 ranked middleweights collide.

ESPN was first to report that No. 6 ranked middleweight Darren Till will fight No. 5 Derek Brunson in the main event of the August 14 UFC event. The report also says that Till needs to clear medicals as he broke his collarbone back in April, which forced him out of his fight with Marvin Vettori.

Brunson (22-7) is riding a four-fight win streak since his TKO loss to current middleweight champion Israel Adesanya. In 2019, the 18-fight UFC veteran defeated Elias Theodorou by unanimous decision and then followed that up with another decision win over Ian Heinisch at UFC 241. In his only fight in 2020, he dismantled hot prospect Edmen Shahbazyan and won via TKO in their main event. In his most recent win, he defeated Kevin Holland at UFC on ESPN 21 this past March.

Till (18-3-1) has had some unfortunate injury luck the past five months. In December, he had to withdraw from his main event fight with Jack Hermansson and then pulled out of his fight with Marvin Vettori in April. In his most recent fight, he lost a unanimous decision to Robert Whittaker on ‘Fight Island’ last year.

No location, venue, or broadcast details have yet to be announced by the promotion for UFC’s August 28 event. No other fights have been reported. 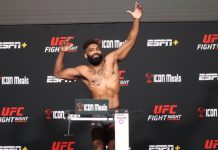