A top 10 UFC lightweight will defend his ranking in July.

ESPN was first to report that No. 10 ranked Islam Makhachev will fight Thiago Moises on July 17. Sources later confirmed the booking to Cageside Press.

While most everyone thought that Makhachev (19-1) would get a top 10 opponent, he has decided to stay active and fight an up-and-comer. The Russian is on a seven-fight win streak dating back to his only professional loss in his second UFC fight. Makhachev did not fight at all in 2020 due to injuries and travel restrictions but returned dominantly at UFC 259. He fought Drew Dober and submitted him in the third round after completely controlling him in the first two rounds.

Moises (15-4) will be looking to break into the rankings and snatching his opponents No. 10. The Brazilan is riding a three-fight win streak, which started last year. He submitted Michael Johnson at UFC Fight Night: Smith vs. Teixeira. Moises would return five months later on Halloween and defeat Bobby Green via unanimous decision. Most recently, he defeated Alexander Hernandez via unanimous decision. 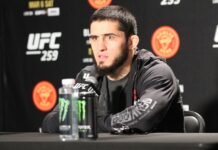 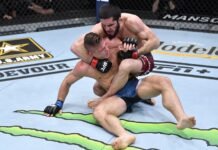 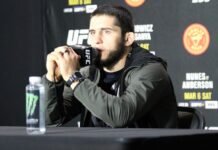