They can’t all be winners. And after UFC Vegas 23, we’re taking a look at those who weren’t able to pick up the ‘W’. The UFC will have some tough choices with some of these names. Let’s see if we can’t help them out a bit.

This will almost feel like cheating, but I wrote this just a few weeks ago:

“After his one-sided loss to Derek Brunson, Kevin Holland stated that he thinks he probably needs to head back to welterweight. It certainly makes a lot of sense given that he didn’t seem to have the requisite takedown defense to survive with the bigger, stronger fighters at 185lbs. He also weighed in well under the middleweight limit. If he does drop down, the UFC should start with a fun striking match to see where he fits there. Santiago Ponzinibbio is also coming off of a disappointing loss and would surely oblige the loudmouthed Holland in the type of fight he’s looking for. In addition, Ponzinibbio also has the name value that Holland seemed to desire in his post-fight interview.”

In my opinion, his fight with Vettori changes none of how I feel here. Let him go back down and have some fun with the Argentinian.

After going undefeated in 4 UFC fights (5 if you count Contender Series), Yusuff faltered for the first time in a unanimous decision loss to Arnold Allen. Ultimately, Yusuff’s output wasn’t enough for the defensive striking and power of Allen. With a lot of lower end of the top 15 already booked, Yusuff might be looking at a bout with another fighter just on the fringe of the rankings. Alex Caceres has probably earned himself a shot at a ranked foe with 4 straight wins. In addition to giving Yusuff a chance to bounce back, it would test him against someone who has similar defensive metrics as Allen.

While Sam Alvey is a fan favorite and is rarely in a boring fight, this loss does make it 6 straight without a win for Smilin’ Sam. It is hard to imagine the UFC breaking their usual actions and keeping him around for a chance to go for 7, whether he deserves it or not. If they do decide to give him one more kick at the can, you have to imagine it’ll be against a newcomer or someone who has lost their debut even. Jordan Williams fits that bill. It’d be a nice fight for the younger fighter to get his legs under him after he was out-struck in his debut.

This past Saturday was a tough return for Nina Nunes. After nearly two years away and the birth of her first child, Nunes struggled to get going against a game Mackenzie Dern. Even in the striking department she looked a step or two behind the world champion grappler. However, it’s hard to write off Nunes, who really didn’t have enough time to get her feel back. I doubt she needs to move too far down the rankings before finding another fight. Like Nunes, Michelle Waterson is just 1-2 in her last 3 and has struggled to pick up the signature win that she would need to make herself a contender. A fight between the two would serve to catapult one of them right into that mix.

Perry, like Alvey, is another one it wouldn’t be shocking if the UFC let go. His out of cage antics are nothing that a company about to go public would want in the headlines. Even when just considering his recent results, Perry is 1-4 in his last five. Of course, his fights usually bring a fair amount of action due to his reckless style and willingness to exchange, so there is always a chance we see him again. If we do, I expect it to be against another fighter on the border of being released. David Zawada is just 1-3 and likely would have been let go if not for a triangle choke victory over Abubakar Nurmagomedov. 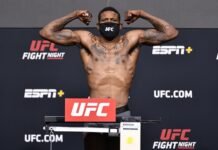