Marvin Vettori defeated Kevin Holland via unanimous decision in the main event of UFC Vegas 23. Vettori won every round against Holland, who stepped in to take this fight on short notice while coming off a loss to Derek Brunson. Today we will be looking into what is next for the winners of UFC Vegas 23.

After his victory this past weekend, Vettori said that he should be next in line to challenge Israel Adesanya for the middleweight title. Others feel like the winner of Robert Whittaker versus Kelvin Gastelum should be next in line for a rematch with Adesanya. Prior to taking on Holland, Vettori was supposed to be fighting Darren Till. He will likely be getting that fight booked once again because of how good Adesanya’s fights with Gastelum and Whittaker were. Vettori has also yet to beat a top-three guy in the division.

Vettori’s next fight: Darren Till

Arnold Allen won a close decision over Sodiq Yusuff at UFC Vegas 23. Allen looked to win both of the first two rounds in the fight and looked impressive doing it. He looked impressive enough to get a fight inside the top ten in his next fight. A fight that looks interesting would be Allen taking on the winner of Dan Ige versus Chan Sung Jung. Ige is currently ranked number eight in the featherweight division. The Korean Zombie is ranked number five in the division. So either man should be right around the #5 spot after June 19.

Julian Marquez submitted Sam Alvey early in the second round of their bout at UFC Vegas 23. This win puts Marquez on a two-fight winning streak inside the UFC with both of those wins being by submission. Marquez has a 100% finish rate while never being finished in his professional career. After the fight, the idea of a Marquez fight with Joaquin Buckley (who has feuded with Marquez’s coach, James Krause), was floated. Marquez turned down the idea saying, “that’s my coach’s fight.” Instead, Trevin Giles makes perfect sense for Marquez’s next fight. Both men have a lot of power in their striking. Giles is 14-2 as a professional mixed martial artist. Both of his losses have come inside the UFC octagon and they are both submission losses. He lost by submission twice in 2019 against Zak Cummings and Gerald Meerschaert. Giles is currently on a three-fight winning streak so the fight makes sense on both sides.

Mackenzie Dern submitted Nina Nunes via armbar in the first round of their fight this past weekend. Before this fight took place, Dern was ranked number 11, and Nunes was ranked number five in the women’s strawweight division. This win will likely push Dern to just outside the top five and lines her up for a big fight in the division. Dern will probably not wait for the next title shot and she will likely take a fight before now and then. Joanna Jerdrzejcyk would be perfect for Dern. Jedrzejcyk has great striking but has never really been tested by someone as dominant as Dern is on the ground. If Dern could get past Jedrzejcyk she would undoubtedly be next in line for the title.

Daniel Rodriguez beat Mike Perry pretty decisively this past weekend. Rodriguez showed great striking and was able to keep Perry at the end of his punches for the entire fight. Besides two takedowns, Perry didn’t really have any answer for Rodriguez for three rounds. This win brings Rodriguez to 3-1 in the UFC with his only loss being to Nicolas Dalby by decision. In his next fight, he should be looking to fight Max Griffin. Griffin is a great counter striker and has a two-inch reach advantage on Rodriguez. Griffin is on a two-fight winning streak with both wins by TKO and knockout. He also has only been finished once in his professional career, by Colby Covington in 2016. 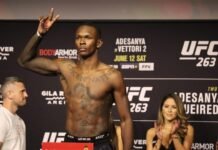