Former UFC and Bellator MMA lightweight champ Eddie Alvarez returns to the ONE Championship this week, as part of the promotion’s coming out party on U.S. broadcast home TNT. ONE on TNT 1 takes place Wednesday, April 7. And while the event itself goes down in Singapore, it will be broadcast live in prime time in the U.S.

A flyweight title fight between Adriano Moraes and Demetrious Johnson headlines. Alvarez is one of the other stars of the show, which has been placed immediately after TNT’s hit wrestling series AEW Dynamite.

Alvarez (30-7, 1NC) did not get the start he wanted in ONE, losing in shocking fashion to Timofey Nastyukhin in March of 2019. He would bounce back against ex-champ Eduard Folayang months later — and now has the opportunity for a second straight victory. A statement win could be big. Yet as Alvarez explained during this week’s ONE on TNT 1 media day, he’s always looking to make those.

“I’m not the promoter, so for me, it’s about going in there and always making a statement. I’m not here just to win. Wins are for me, being spectacular is for the fans,” explained Alvarez. “I step in the cage, and the idea is to be spectacular. Winning is usually just a by-product of that.”

At 37, Alvarez doesn’t yet feel that his window in MMA is limited. Quite the opposite. “I don’t have a limited window. This is almost my second decade in this sport, and I love what I do.”

And with that in mind, a year off due to the coronavirus pandemic “hasn’t been frustrating,” said Alvarez. “I got a chance to heal,” he noted. Adding that after two decades, “a little bit of time off never hurt anybody.”

Besides which, the time away “wasn’t just my problem, it was the world’s problem. I think all champions, whenever they face adversity, you have to adjust. You have to pivot, you have to change direction, and do what you can within your means to keep your life going.”

In Alvarez’s case, the time off allowed him to focus on family. “I’m a father and a husband first who happens to fight. So I got a chance to be a better father, better husband.”

Now it’s back to fighting, and a chance to claim gold in a third major organization. Alvarez first claimed lightweight gold in Bellator in 2009, winning the promotion’s inaugural 155lb title. He’d already built up his name as the “Underground King” by that point. He’d go on to defend the title, then lose it to Michael Chandler, only to win it back in their second fight. After clearing a few legal hurdles, Alvarez vacated the title, exited the promotion, and went on to win gold in the UFC in 2016.

Another five years later, and Alvarez could be circling another chance at gold with a big win over Iuri Lapicus on Wednesday. As to what another belt would mean at this point in his career, “For me personally, I’d be the greatest lightweight to grace the sport of MMA,” Alvarez told Cageside Press. “That’s how I feel about it.”

“It’s easy to be great for five years or ten years, and have that energy to be able to do that, just to take on the sport and be energetic and excited about what you do,” he continued, “but this is almost two decades going, travelling to all parts of the world, fighting champion after champion after champion from all over. Not staying in one place, and taking on all challengers. At the end of the day, my resume will speak for itself. And anyone wanting to debate it, just check the scoreboard.”

Watch the full ONE on TNT 1 media day interview with Eddie Alvarez above. 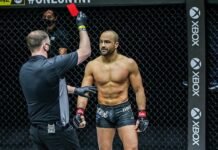 Eddie Alvarez Will Face Marat Gafurov vs. Rae Yoon Ok Winner at ONE on TNT IV