Tyler McGuire’s lone loss in ONE Championship, and as a professional mixed martial artist period, came for welterweight gold.

“That was a pretty interesting fight for me. I think that was like my 18th fight to that point,” he recalled, speaking to Cageside Press this week. “I’d fought one way for those 18 fights, and the answer was always ‘more horsepower.'”

Only, that time around, more horsepower wasn’t the answer. “In a five round fight, you need to be a little bit more of a tactician. As I quickly found out. As I started to get into the later rounds, all the horsepower that I put forth in the first few rounds, it did play a role,” McGuire (12-1) admitted. “I wasn’t gassed or anything, but I definitely would have approached it a little bit differently.”

That fight was two and a half years ago. The American, who is an active member of the Air Force, would then find himself with a two-year hiatus, before finally returning to defeat Agilan Thani this past December.

In his time off, McGuire worked on being more efficient, getting away from his stubborn tendency to just try to break opponents — which he admitted his opponent in that title fight, Zebaztian Kadestam, didn’t do.

Now, looking to get back in the thick of things, McGuire has been paired up with the highly touted Raimond Magomedaliev as part of the ONE on TNT 1 card. The fight will take place in Singapore, but the audience will be stateside, with the show airing live in prime time this Wednesday night.

“It’s amazing. ONE does a fantastic job with their promotion,” said McGuire, who praised the behind-the-scenes efforts that have led to “top-notch” events. Plus, the ONE on TNT series serves as an introduction to American fans. “I think it’s a great opportunity for the American audience to be exposed to the different ruleset, as far as knees on the ground,” said McGuire, speaking at this week’s ONE on TNT 1 media day. “You have to defend yourselves at all times. There’s no resting position just because you have a hand on the ground [to make yourself a downed opponent].”

And what really doesn’t hurt? Sharing the card with the likes of Demetrious Johnson and Eddie Alvarez. “Those are big fights as well. It’s an amazing opportunity. That’s why I want to put the best version of myself forward, so that people can start wanting to follow me as well.”

Watch the full ONE on TNT 1 media day interview with Tyler McGuire above. ONE on TNT 1 takes place this Wednesday, April 7, with the main card live on TNT starting at 10PM ET. 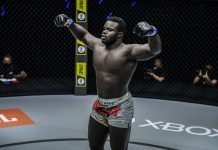