As first reported by Cole Shelton of BJPenn.com, former featherweight title challenger Felicia Spencer will welcome former amateur boxer turned mixed-martial-artist Danyelle Wolf to the UFC on May 22. The event and location have yet to be officially announced.

Canada’s Spencer (8-2) will be returning for the first time since last June. She faced current champion Amanda Nunes on June 6, 2020, at UFC 250 in a losing effort. The “Feenom” is 2-2 in the UFC, only losing to Nunes and former featherweight champion and women’s MMA legend Cris Cyborg. Spencer entered the UFC on a six-fight win streak, having claimed Invicta FC gold. In her UFC debut, she pulled the slight upset and defeated Megan Anderson, stealing her featherweight title shot. In her other UFC win, she battered Zarah Fairn Dos Santos with elbows for a first-round TKO.

Wolf (1-0) received a UFC contract last year after defeating Taneisha Tennant on season four of Dana White’s Contender Series. She won the fight via unanimous decision. UFC President Dana White said she obviously needed more MMA experience, but added that her boxing experience was enough and signed her. Getting Spencer in her UFC debut is a very tough hill to overcome, but with the featherweight division not having enough fighters to fill out a top 15, there was really no other option.

Double champ Nunes and Anderson fight at UFC 259 in two weeks, and it would not be the craziest thing in MMA to see the winner of Spencer vs. Wolf get the next title shot. 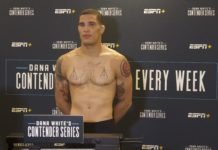 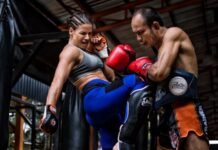 DWCS: Danyelle Wolf Says Key to Success for Boxers in MMA is Respect — for the Sport