A high stakes middleweight bout is on deck for April 10 as top contenders Darren Till and Marvin Vettori are in talks to headline the Fight Night event on that date.

Per ESPN, a fight between top middleweight contenders Marvin Vettori (16-4-1) and Darren Till (18-3-1) is expected to headline the UFC Fight Night on April 10.  The bout comes just seven days before another middleweight bout between Robert Whittaker and Paulo Costa which leads many to believe there will be high stakes for the winners of both bouts in terms of the title picture.

Darren Till is looking to bounce back from a knee injury and loss to Robert Whittaker last July.  Till had previously been scheduled to fight top contender Jack Hermansson in December before the persistent injury forced him out of the bout.  “The Gorilla” is best-known as a former welterweight title challenger with wins over Stephen Thompson and Donald Cerrone before he moved up to middleweight in 2019 and recorded a victory over top contender Kelvin Gastelum.  His bout with Whittaker in July was expected to be a possible title eliminator should he have won, but a loss forced Till to regroup and work his way back up the ranks.

Marvin Vettori has emerged as one of top contenders in the middleweight division over the past two years.  After fighting current division kingpin Israel Adesanya to a close split-decision, Vettori has turned away four straight opponents.  “The Italian Dream” most recently fought Hermansson (notably stepping in for Kevin Holland who had stepped in for Till) in December and triumphed in what was an exciting five round contest.

Currently, middleweight champion Adesanya is booked to fight for the light heavyweight championship in March.  Should he be victorious, it is expected that he will stay at 205 pounds to push for a possible fight with former champion Jon Jones or to defend the title against Glover Teixeira considering he already has victories over Vettori, Whittaker, and Costa who all fight within a two week span.  Should Adesanya be victorious, it is expected that Till and Vettori winner could face the winner of Whittaker and Costa for an interim title later in 2021. 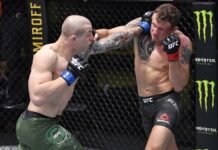