One of Russia’s most exciting regional promotions is back in action this week: Absolute Championship Akhmat. ACA 114 is set to go down in Lodz, Poland, and in a week short on MMA action, it will hopefully tide fans over.

At ACA 114, the main card kicks off with a middleweight bout between Bartosz Leśko (9-1-2) and Rene Pessoa (22-6). Following the opener, featherweights are on deck with Dmitriy Parubchenko (14-1) facing Leonardo Limberger (13-1). The night moves on with Romanian Aurel Pîrtea (21-11), squaring off with Georgian native, Levan Makashvili (17-3-1). After that, Rafał Haratyk (13-3-2) will have a chance to represent Poland when he battles the Bulgarian, Nikola Dipchikov (19-7) in the co-main event. Finally, the monster fight card is topped with a vacant heavyweight title fight, as Daniel Omielańczuk (24-9-1) and Tony Johnson Jr. (13-5-1) square off. Action starts with six preliminary bouts and the event will ultimately end with someone taking home gold.

Riding a three fight win streak, Leśko primarily uses submissions to end fights. Consequently, he’s shown effective back control, with six rear naked choke finishes. Since many of those submissions were in the first round, it stands to reason that keeping distance from Leśko is vital to winning against him. In contrast, the Brazilian, Pessoa uses a couple of different submissions, such as a keylock, guillotine and the common rear-naked choke. Despite Pessoa losing in the fifth round via TKO against Irwing Machado, he displayed toughness and durability going five rounds. Either way, both men are bringing monstrous ground games come fight night.

The Ukranian born Parubchenko went fourteen wins before encountering defeat. Even though he suffered his first loss to Lom-Ali Eskijew via strikes, he amassed a lot of wins before that. Unlike Limberger’s style, the Ukranian has shown a lot of finishing power. Prior to his only loss, Parubchenko’s “club and sub” style was the perfect combination. Now, the pressures of being an undefeated fighter vanish, and the Ukrainian native will need to adapt to the changing winds. Unlike Parubchenko, Limberger has less finishing ability. Since his acumen for competing has kept him unbeaten since 2013, Limberger holds the momentum at ACA 114.

After a dominant second round TKO at ACA 109, Makashvili reiterated his dominance in the lightweight division. In Pîrtea’s defense, he has an extremely dangerous guillotine choke. Ideally it would serve the Georgian to close the distance, since most of his wins have come by way of submission. Pîrtea has shown his capacity for grappling with quick finishes in the first round, to also submitting foes late into the final rounds. Ultimately the threat of a quick submission may cause Makashvili to play it safe at the beginning.

“The Polish Tank” Haratyk has shown a relentless style in the cage, and is currently on a six fight win streak. With two of his three losses coming by guillotine choke, Haratyk’s over-zealousness can sometimes lead him astray. On the other hand it has also lead to a couple of early finishes. In contrast, Dipchikov comes in with a three fight win streak. Subsequently, the Bulgarian, Dipchikov put the division on notice when he blasted his last opponent with knees and punches, finishing him in the first round. Before that, Dipchikov landed a bomb on Alexey Efremov and finished him in thirty-four seconds. Dipchikov’s Combat Sambo style is a must see in the middleweight division where both athletes have respectable records and styles.

Fighting out of Nashville MMA where UFC athlete Dustin Ortiz trains, Johnson is looking to capitalize on this vacant heavyweight title opportunity. The “Hulk” Johnson is looking to make a statement after dropping a decision loss to the formidable Evgeny Goncharov. Evidently, Johnson would show more than just typical heavyweight power, as he opened eyes at ACA 92: Poland with a submission win. Now the American-born fighter, will look to use every tool available at ACA 114.

Opposite to Johnson, Omielańczuk is riding momentum with a four fight win streak. Without a doubt, Omielańczuk’s power will be the story of the fight. At heavyweight, it doesn’t take much so Johnson will need to be extra careful. The Polish wrecking machine stopped his last three opponents in round one by strikes and retired one of them. Omielańczuk will undoubtedly look to end the fight early to secure the vacant heavyweight title. Get ready for all the action live November 26, 10AM ET! But first, let’s take a look at the preliminary bouts. 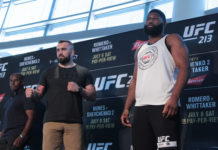 ONE Championship: Unbreakable — Shinya Aoki Says He Has Nothing Left to Accomplish