First reported by Brett Okamoto of ESPN, former UFC interim lightweight champion Tony Ferguson will return to take on top ranked contender Charles Oliveira at UFC 256 on December 12.  The news comes after Ferguson’s push to face new signee Michael Chandler at the event did not come to fruition.  The two are expected to be in the co-headliner for the event.

Tony “El Cucuy” Ferguson’s 12 fight win-streak from 2013 to 2020 had many regarding him as one of the best fighters in the world today, to the point that his cursed bout with lightweight kingpin Khabib Nurmagomedov stands easily as the greatest UFC fight that never happened.  Coming off a loss to Justin Gaethje in May, Ferguson recently made headlines saying that he believes the recently retired Nurmagomedov will return to fight again and is still interested in pursuing that fight.  In recent weeks, Ferguson pushed to face former Bellator champion Michael Chandler whom he had been in talks to face last month.

Charles Oliveira has seen a career resurgence in 2020 as he currently rides a career best seven fight win-streak in the UFC.  Signed as one of the youngest fighters on the roster back in 2010, “Do Bronx” has struggled to maintain momentum in his UFC run that has seen two stints at lightweight and stretch where he struggled to consistently make the featherweight limit.  The veteran has faced some of the best in both weight classes and his current win-streak has seen him finish the likes of Jim Miller, Jared Gordon, and recently Kevin Lee.  Oliveira had been set to face Beneil Dariush in October but withdrew due to undisclosed reasons.

UFC 256 is currently set to be headlined by the bantamweight title bout between new champion Petr Yan and Aljamain Sterling.  The event is set to take place at the UFC Apex in Las Vegas. 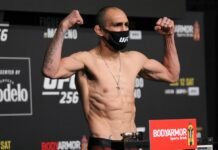 Tony Ferguson vs. Beneil Dariush In The Works For UFC 262