Lawler (28-15, 1NC) was reported out of the bout roughly a week ago, the result of an undisclosed injury. No replacement fighter was announced at the time, and over the weekend, UFC President Dana White had no additional news on who Perry (14-6) might be facing.

However, on Monday, ESPN’s Ariel Helwani was first to report that veteran Tim Means (30-12-1) was stepping in to take the fight.

Means, a former King of the Cage champion, has been with the UFC since 2012. “The Dirty Bird” has been trading wins and losses of late, and last fought in August at UFC Vegas 6. There, he earned a unanimous decision win against Argentina’s Laureano Staropoli.

Perry is coming off a win himself, opposite Mickey Gall in June. However, Perry has been in the public eye of late less for fighting, and more for a string of troubling incidents. Following the Gall win, Perry was videotaped assaulting a fellow patron in a Texas eatery. More recently, his ex-wife, Danielle Nicholson, accused him of domestic violence, which coincided with the release of a 9-1-1 call involving Perry, Nicholson, and Perry’s mother.

Following the restaurant confrontation, Perry was required by the UFC to complete substance abuse treatment and behavioral therapy. 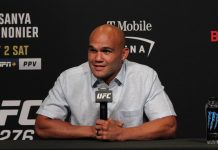 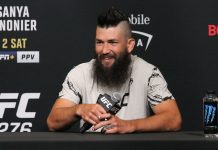