More details have come to light regarding the assault charge Mike Perry is facing following an incident in Lubbock, TX.

In an Incident Report filed by the Lubbock Police Department’s attending officer, obtained by Cageside Press, Perry is described by witnesses as assaulting multiple parties, including a female. One victim, believed to be the man caught on video being knocked out by Perry, was transported to hospital, and later displayed signs of memory loss. The report lists three victims total, all male, as well as two involved parties, both female, a witness, and a suspect. The suspect is not directly named in the report as Perry. However, the fighter was previously verified as the suspect in question.

The “involved parties” are listed as the girlfriend of the suspect, and her friend. In both cases, no names are provided. However, Latory Gonzalez, Perry’s 22-year old girlfriend, became something of a mini-celebrity after cornering him at UFC on ESPN 12.

Names of the victims were provided. However, Cageside Press has opted not to reveal them.

The statements of all involved do not paint Perry in a good light. Per the attending officer, “Victim 3” — believed to be the man seen on video being stuck by Perry — was laying on the ground, being tended to by one of the involved parties, when police arrived. Victim 3 “appeared to be unconscious,” per the report. The second victim, and a witness listed as a security guard for the shopping center where Table 82 is located, advised police that the suspect had been causing a disturbance in the restaurant, and that he assaulted all three victims.

The suspect, allegedly Perry, told police that “These people were putting hands on me as I was trying to leave the building.” The root of the confrontation was apparently an argument between the suspect and Victim 1. This is where things, frankly, look like a mess.

Perry’s statement to police, per the incident report, claims that “there was argument between him and [Victim 1] and that a female, later identified as [Involved Party 2], stepped in between and started ‘clawing’ at him.” Perry also stated that he grabbed for the wrist of the unidentified female known as Involved Party 2, only to grab Victim 1’s wrist instead. The pair shoved one another, then Victim 2 arrived, placing his hands on Perry’s shoulder and, according to the fighter, pushing his face aggressively. At that point, Perry indicated to officers that he attempted to leave the establishment, which is when Victim 3 confronted him. That, of course, is where the video kicked in.

The party listed as Victim 2, however, gave a different version of events. He stated that the suspect hit Victim 1, then hit the girl known as Involved Party 2, as well as another individual who had left the scene by the time police arrived. Victim 2 attempted to break up the fight, and was hit by the suspect believed to be Perry for his troubles. The witness in the case, the aforementioned security guard, arrived at the scene as Perry struck Victim 3, the man on video.

Victim 1 told police that it was Perry who approached him, apparently wanting to know what the man was discussing with his girlfriend, and asking “what other people are you talking about?” When the victim told Perry is was none of his business, Perry allegedly shoved the man’s table toward him and challenged him to a fight.

Of all involved, only the third victim, the man seen struck on video, required medical attention. He was transported to Covenant Medical Center for treatment, and was later interviewed by police in hospital. However, after being struck by the suspect, the victim displayed memory troubles and could only remember the suspect hitting the second victim, and following Perry as he attempted to leave the restaurant.

The only charge listed in the initial incident report was Penal Code 22.01, which is Assault, a Class A misdemeanor except in certain, specific circumstances.

In a video capturing the end of the incident, Perry can be seen using racial slurs, striking the third victim, and berating a female companion. Perry’s only comment thus far has been to say “no comment” on Twitter. Girlfriend Latory Gonzalez has not made any statement.

Mike Perry in a bar fight last night over someone “touching him”.

This is pretty disgusting behaviour from a UFC calibre fighter. Acting like a complete child. pic.twitter.com/ZAuxZTtXtW

A second police report, which Cageside Press received a redacted copy of, indicates that the manager of Table 82 requested Perry be “criminally trespassed” from the property. Perry was reportedly informed, and told officers he understood.

None of the allegations have been proven in court. 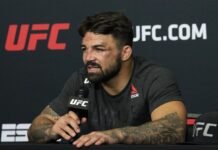 UFC Vegas 5: Randy Brown Appreciates Vicente Luque Being a Man of His Word