ONE Championship’s Reign of Dynasties II marked the second show for the promotion since their return to Singapore. No titles were on the line, no title eliminators graced the card, but there was an interesting twist to the main and co-main events. Those featured Zhang Chenglong, in the kickboxing main event, and Zhang Chunyu, in the Muay Thai co-feature.

Unfortunately, neither brother was able to leave Reign of Dynasties II with their hand raised. Chenglong lost a split decision in the main event, against Japan’s Hiroki Akimoto. And legendary Thai kickboxer Sagetdao Petpayathai returned in the co-main event, earning a unanimous decision opposite Chunyu. A former Lumpinee Stadium champion in three weight classes, Petpayathai had transitioned to MMA in 2017 and posted a 3-1 record. His victory over Zhang was his first fight in Muay Thai since 2014.

Full results and a gallery of highlights from ONE Championship: Reign of Dynasties II are available below. 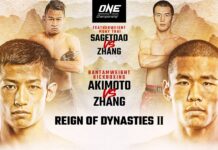