After returning to Kallang, Singapore earlier this month, ONE Championship was back with its second card at the Singpore Indoor Stadium on Friday.

Reign of Dynasties II was topped by kickboxing action this time out, with Japan’s Hiroki Akimoto facing off with Zhang Chenglong at bantamweight. Both men were champions outside the confines of ONE Championship.

Making the card something of a family affair, Chenglong’s brother Chunyu was also on the card, taking on Sagetdao Petpayathai in the co-main event Muay Thai fight.

Only two mixed martial arts contests were part of Friday’s card. The first featured strawweight action, as Japan’s Ryuto Sawada too on Miao Li Tao of China. “Dragon Boy” had seen a three-fight win streak snapped in his last outing, and was looking to bounce back against Miao, who had seen his own three-fight streak end last November. 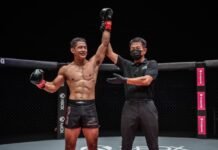 Bellator 249: Ricky Bandejas Can’t Wait to Mix It Up with “Top Prospects” Bellator...