William Knight kicked off the UFC 253 prelims on ESPN with a decision win over Aleksa Camur.

Recent Contender Series winner William Knight, who had spent the last while on a developmental deal with the UFC, made his official debut at UFC 253. There, he was taking on another veteran of DWCS, Aleksa Camur.

The light heavyweight bout opened up the televised preliminary portion of the PPV card, set on Fight Island (Yas Island) in Abu Dhabi. The undefeated Camur had won his own promotional debut back at UFC 246, and is a training partner of heavyweight champ Stipe Miocic.

Camur got to work early, pumping the jab, looking to fight at his range. A slip off a head kick from Camur forced Knight to rush forward and press Camur against the cage. Camur was the one controlling the position winning the underhooks and working short knees. Knight was having trouble getting his back against the cage, but was still showing good balance defending the trips from Camur. Not a lot of action, leading to the ref separating them. Knight closed the round with a nice combination.

Knight opened up the second round with a lot of kicks before Camur pressed him right back against the fence. Camur hit a trip takedown but Knight scrambled and got top position. Camur still was able to get back to his feet right into the clinch. Knight in return hit a nice trip takedown and Camur got right back up. Another strong outside trip from Knight. Knight got right on the back into the mount and threatened with a nasty kimura to end the round there.

Early in the round three Camur was landing on the chin of Knight but continued to press him against the cage. That allowed another takedown landed by Knight. Knight easily passed into side control but Camur later escaped and got top control. The fight went right back on the feet briefly before Knight got another power takedown. Knight closed the fight on top in mount with some good ground and pound. 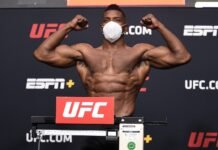 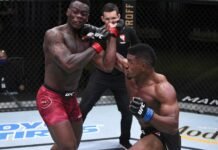